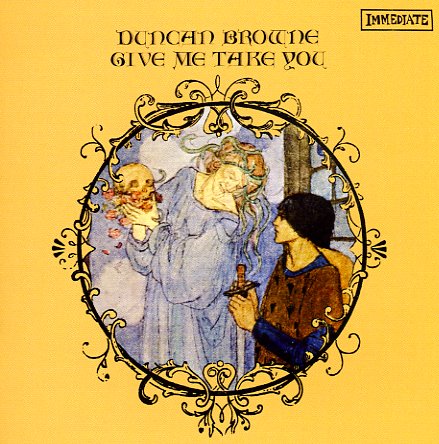 Give Me Take You

A completely charming set from the British scene of the late 60s – one of those "shoulda been huge" sorts of records, but one that's become all that much more charming over the years because of its obscurity! Duncan Browne is a hell of a songwriter, and has a voice that's immediately captivating – served up here in a mix of acoustic instrumentation and larger arrangements that's not that far from the best sound of Island Records during the same generation – but with more of the singer/songwriter spin you might hear from Colin Blunstone. The whole thing's wonderful – a record that just keeps on giving over the years – with titles that include "Give Me Take You", "Ninepence Worth Of Walking", "The Ghost Walks", "Chloe In The Garden", "On The Bombsite", "Gabilan", "Alfred Bell", and "The Death Of Neil". Great UK version features 10 bonus tracks – some unissued demo and rehearsal cuts, plus "The Cherry Blossom Fool".  © 1996-2022, Dusty Groove, Inc.