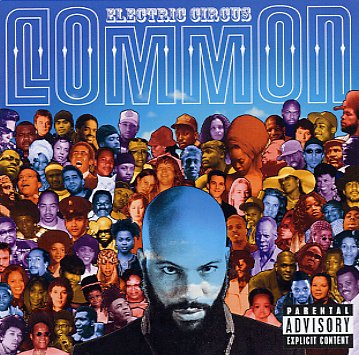 NuHop? Common newcomers who buy Electric Circus for the single with Mary J Blige are going to be left with some head scratching – but if you like the spiritual/psychedelic Com that was hinted at on Like Water For Chocolate, this may be the follow up you were waiting for! This is still hip hop – with production by the Neptunes, Jay Dee, ?uestlove and others, but it's definitely a boundary stretcher. The mood runs from Roots style soul bumpers to Hendrix and Eugene McDaniels style feedback heavy freakouts. There's a guest on nearly every track, mostly from the Okayplayer camp and NuSoul titans, including Bilal, Omar, Pharrell Williams, Cee-Lo, Erykah Badu, Jill Scott, Laetitia Sadier of Stereolab and others. We won't lie to you, we miss the Chicago hip hop Common that kicked insight over raw and soulful productions, but you can't fault the guy for being an artist, and he really has crafted something original here. A great cover – a kind of rainbow drenched cut and paste photo collage of the contributors and inspirations with Com out front, sort of reminding us of Tribe's Midnight Maurauders, and even Sgt. Pepper. Tracks include "Ferris Wheel", "Soul Power", "The Hustle", the first single "Come Close", "New Wave", "Star *69", "Jimi Was A Rock Star" and more.  © 1996-2021, Dusty Groove, Inc.
(Out of print, punch through barcode.)