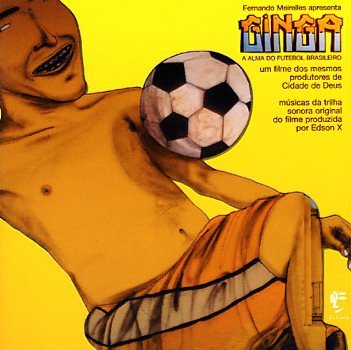 Ginga A Alma Do Futebol Brasileiro

A creepy cover, but a really amazing batch of grooves – one that blends rootsy Brazilian percussion with elements of dub, funk, and hip hop – originally recorded as the soundtrack for a documentary on football, but sounding plenty darn great here on its own! Edson X is at the helm of the record, but gets help from a number of other younger artists as well – and the album's awash in tight percussion jams, funky rhythms, stripped down grooves that are all surprisingly free of cliche! At times, there's a bit of the Trama-like blend of old and new going on – but the overall sound is much rougher and more rootsy, filled with live instrumentation and sometimes a bit of the noisier side of baile funk production. Titles include "Forro No Bar", "O Que E A Ginga", "Gingar Para Ser Feliz (Ginga mix)", "Aleluia (baile funk mix)", "O Craque", "A Hora Do Goi (swing guitar)", "Bonde Do Bem (live session)", and "Funk Da Vitoria (extended)".  © 1996-2021, Dusty Groove, Inc.
(Out of print.)