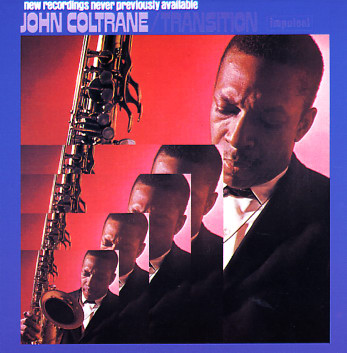 There's no sense of "transition" here – as the album's an incredibly solid one, and stands with John Coltrane's best mid 60s work for Impulse – even if the session wasn't issued by the label until after his early death! The work builds strongly on the Love Supreme vibe – soaring, searching, and finding whole new space in jazz – but all with a unified conception that's driven by an unbridled sense of energy. The group here is the quartet with McCoy Tyner on piano, Jimmy Garrison on bass, and Elvin Jones on drums – and we're still quite puzzled why Impulse never managed to get this one released until a few years later! Titles include "Transition", "Dear Lord", and the side-long "Prayer and Meditation" suite.  © 1996-2022, Dusty Groove, Inc.
(Out of print. Disc hub has a name in marker.)