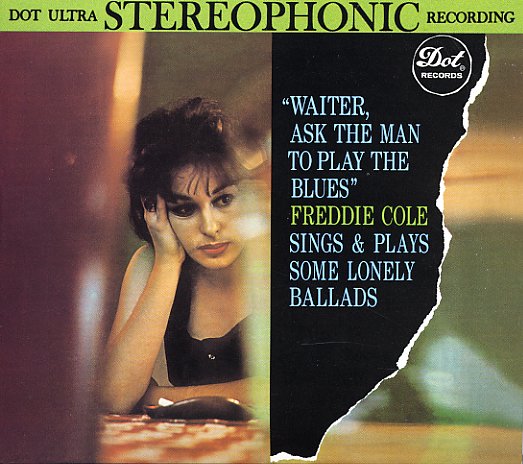 Wonderful work from vocalist Freddie Cole – brother to Nat, and an equally talented singer! Freddie's got a sound that's a bit sadder and more world-weary than Nat – still in kind of a small combo jazzy mode, as would bespeak his roots, but singing with a really honest approach that makes the album the kind of rare male vocal jazz treasure that hardly shows up! Tracks are a great mix of bar songs and lost love numbers – and titles include "Black Night", "Just A Dream", "Rain Is Such A Lonely Sound", "This Life I'm Living", and "Waiter Ask The Man To Play The Blues".  © 1996-2022, Dusty Groove, Inc.
(2004 digipak pressing – in great shape!)

My Gentleman Friend
Verve/Universal, 1959. Used
CD...$9.99
A magical exercise in understatement – and one of Blossom's best albums for Verve! The late 50s session features Blossom back in the US and working with a small combo that includes Bobby Jaspar on flute, Ray Brown on bass, Kenny Burrell on guitar, and Ed Thigpen on drums – all grooving ... CD

Blossom Dearie
Verve, 1956/Late 50s. Used
CD...$5.99
Amazing early work from Blossom Dearie – quite possibly her best album for Verve, recorded in the mid 50s right after her return from work on the Paris scene! The style here is sprightly and whimsical, yet also fragile and human – a blend that few other singers can pull off as well as ... CD