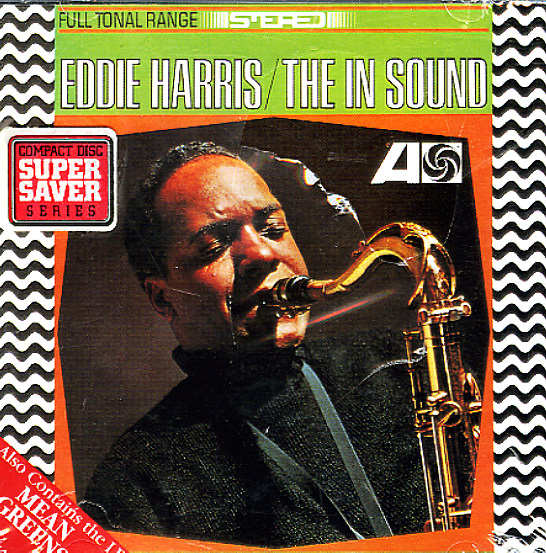 Wow! We can never get enough of Eddie Harris. Despite all of the silly situations he's ended up in over the years, an album like In Sound still stands as a beautiful testament to all of the raw power in Eddie's playing. His tone is perfect, and totally unique – and he plays here with Cedar Walton on piano, Ron Carter on bass, Billy Higgins on drums, and the great Ray Codrington on trumpet, who also played with the JFK Quintet. No tricks here, just incredibly solid jazz playing, on tracks like Eddie's famous "Freedom Jazz Dance", plus "Born To Be Blue" and "Cryin' Blues". Mean Greens is another example of classic 60s soul jazz material by Eddie – and proof that the move to Atlantic was a good one! As usual with Eddie's 60s sessions, the players are very hip – and feature an amalgamation of younger and lesser-known talents like Melvin Jackson, Ray Codrington, and Sonny Philips. Cedar Walton also plays some lovely piano on the record, giving a few tracks a bit more of a lyrical touch than usual – and Eddie responds to this nicely in his solos. Includes an early take of "Listen Here", with Eddie on electric piano, next to Sonny Philips' organ. Also with "Goin' Home", "Blues In the Basement", and "Mean Greens".  © 1996-2021, Dusty Groove, Inc.
(Out of print.)

Cool Sax, Warm Heart/Cool Sax From Hollywood To Broadway
Columbia/Collectables, Mid 60s. Used
CD...$6.99
Ok, so this isn't funky Eddie Harris – but the 2 albums on this set are some of Eddie Harris' most unique albums of the 60s! The records features Eddie blowing in that lean and soulful mode that he used on his best Vee Jay albums – a bit exotic, but never meandering, with impeccable ... CD

Greater Than The Sum Of His Parts (The In Sound/Mean Greens/Tender Storm/Silver Cycles)
32 Jazz/Atlantic, Late 60s. Used 2 CDs
CD...$24.99
Fantastic material from the late 60's period in which Eddie Harris was using his amazing tone, Atlantic's money, and the deep resources of the Chicago jazz scene to come up with some of the best recordings of his career. The four albums on this CD set – The In Sound, Mean Greens, Tender ... CD

Doctor Is In & Out
Atlantic/Collectables, 1976. Used
CD...$12.99
One of Yusef Lateef's funkier albums for Atlantic – and a record that features some great keyboard work from Kenny Barron! The liner notes indicate a current Lateef fascination with rhythm, and it tries to present this fascination in a way that implies a bigger intellectual approach to the ... CD