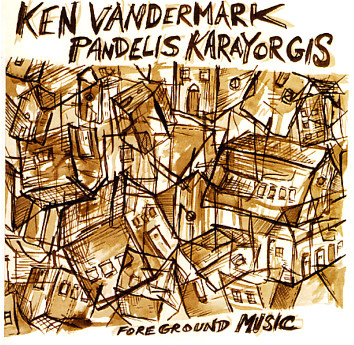 Some of the most beautiful, introspective work we've heard in years from Ken Vandermark – spare duets with pianist Pandelis Karayorgis – done in a mode that almost recalls the best experiments of Lee Konitz or Jimmy Giuffre from many years back! The sound is spare, but never too sleepy or lacking for inspiration – as Vandermark really opens up in this setting, matching the angular piano work of Karayorgis with some beautifully thoughtful lines on a variety of saxophones and clarinet. Some tunes have a slow-building approach that hangs the sound in the air almost magically – while others come on with a full attack, then slow things down for a bit of contemplation. As always with Vandermark, the influences of the music are given full credit throughout – and titles include "JCT", "United Forces Of One", "Lifgatowy", "Betwixt", "Title Without Year", and "Absolute Camel".  © 1996-2021, Dusty Groove, Inc.
(Out of print.)