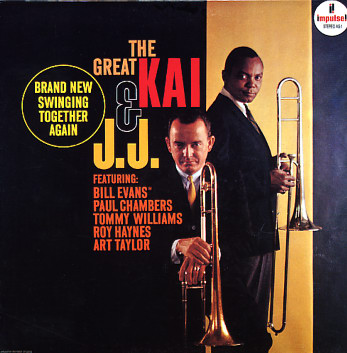 The famous 50s team of JJ Johnson and Kai Winding are reunited strongly here – after working alone for several years on their own projects! The groove here is a bit more open and less arranged than some of the pair's earlier projects – mostly just two trombones in the lead, soloing separately, with backing from a rhythm trio – split into two for each half of the album, with Bill Evans, Paul Chambers, and Roy Haynes handling side one; and Evans, Tommy Williams, and Art Taylor on side two. Tunes are short, but include deft demonstrations of the solo talents of each player – and titles include "Judy", "Alone Together", "Going, Going, Going", "Trixie", "This Could Be The Part Of Something", "Georgia On My Mind", "I Concentrate On You", and "Just For A Thrill".  © 1996-2021, Dusty Groove, Inc.
(Recent 180 gram pressing.)

K + JJ – East Coast Jazz Series No 7
Bethlehem, Mid 50s. Very Good
LP...$14.99
A cool quintet session from the great trombonists JJ Johnson and Kai Winding – one that really lets their twin horns soar free together – with only a bit of light backing to spur them on! The group's got a great rhythm section – with Dick Katz on piano, Al Harewood on drums, and ... LP, Vinyl record album

Jazz Messengers! (Impulse)
Impulse, 1961. Very Good+ Gatefold
LP...$39.99
Killer stuff by Art Blakey – one of his few non-Blue Note sessions from the time, and a hard-wailing set that features the Jazz Messengers as a sextet! The format is one that flourished briefly in these early 60s years – and in this case, the already great lineup of Lee Morgan on ... LP, Vinyl record album