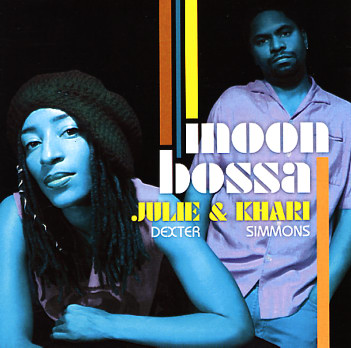 A wonderful, bossa-inflected jazzy soul surprise from UK-bred/Atlanta-based diva Julie Dexter and ATL-fellow Khari Simmons of Jiva – an effervescent batch of tunes that meld the best modern soul styles of both artists with a mutual affection for bossa rhythms! The duo pulls off the blend with what feels like an effortless grace – Julie's vocals are light, soulful and often quite jazzy in way which expands nicely on her previous work – with a backdrop of bass, Rhodes and B3, Moog, occasional horns and percussion. Nice! Tracks include "Moon Bossa", a sweet cover of Everything But The Girl's "My Baby Don't Love Me", "Salt Sea", "Venusian", "The Dove", "Salt Sea", "Venusian", "The Dove", "Sea And Sky", "Promises", "Wave" feat Kenny Latimore and more, plus 3 bonus remixes: "Venusian (Aquariana rmx)", "The Dove (Jiva remix)" and "Fooled By A Smile (Incognito remix)", plus "Moon Bossa (piano outro)".  © 1996-2021, Dusty Groove, Inc.