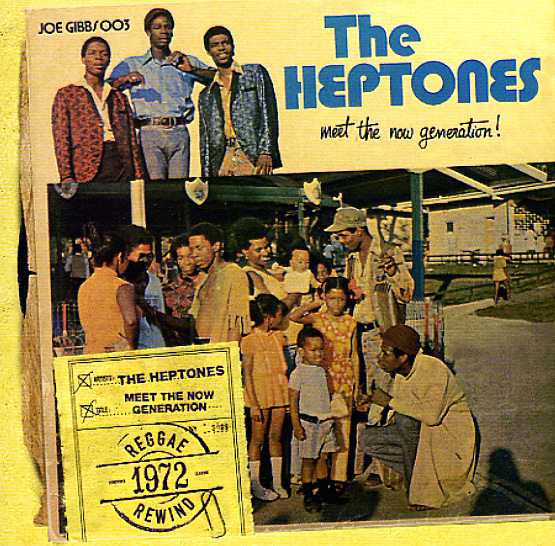 A sweet soulful early 70s set from Leroy Sibbles and crew! The Heptones hip harmonies get a great helping hand from heavyweight producer Joe Gibbs and the bold and bad Now Generation backing band, featuring Mikey Boo Richards, Val Douglas, Michael Chung, Geoffrey Chung and Robbie Lynn. Plus, this excellent reissue package includes hard to get dubs and dee jay versions! 12 tracks in all, including "Hypocrite", "Save The Last Dance", "Our Day Will Come", "Freedom To The People", "Freedom Train", "Every Day & Every Night", "Love Has Many Faces", "Be The One", "The Road Is Rough", "The Magnificent Heptones (3 In 1)", "George Headley Medley" and "I've Got A Feeling".  © 1996-2022, Dusty Groove, Inc.

Scorchers From The Mighty Two
17 North Parade/VP, 1970s. New Copy 2CD
CD...$18.99 21.98 (CD...$12.99)
Joe Gibbs and Errol Thompson moe than live up to their title as the Mighty Two just as this heavy compilation more than lives up to the title of nothing but scorchers! Gibbs and ET showcase their mastery of all styles here, veering from hard and heavy roots to sweet lover's numbers and even a few ... CD

Black Art From The Black Ark
Pressure Sounds, Late 60s/Early 70s. New Copy
CD...$14.99 15.98 (LP...$26.99)
A host of rare gems from the early years of Lee Perry's legendary Black Ark studios – material recorded by Scratch himself, on some cuts featuring The Upsetters, others some close contemporaries – but all nicely unified here by contributions from Lee at just about every level! As with ... CD

Ready & Waiting (Japanese paper sleeve edition)
TSG/P-Vine (Japan), 1976. New Copy
CD...$24.99 29.99
The debut album from Cynthia Schloss – a reggae singer who'd go on to bring a whole new level of soul to Jamaican music! In fact, the album's maybe half reggae, and half soul – delivered by Cynthia with a range that would have been right at home in American soul in the early 70s, ... CD