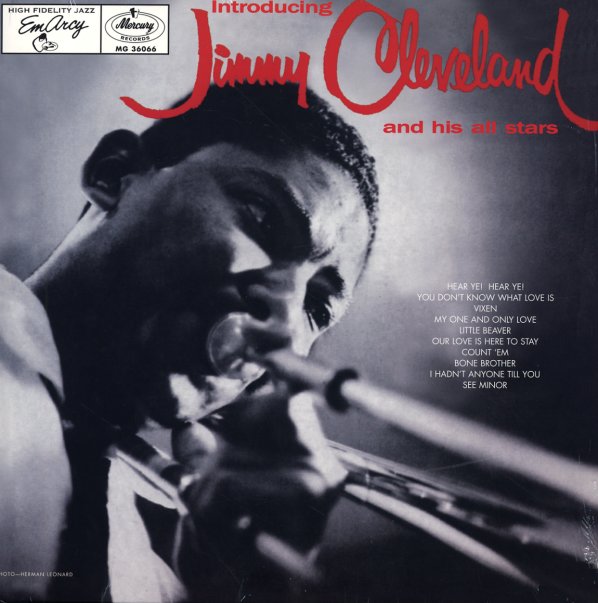 Introducing Jimmy Cleveland & His All Stars

An early leader session for Jimmy Cleveland – one that pulls him out of the Lionel Hampton group, and puts him in the company of a number of different all-stars – top level players that Mercury brought together in three different sessions for the album. Players include Lucky Thompson, Cecil Payne, Barry Galbraith, Wade Legge, Paul Chambers, and Jerome Richardson – and it's the quality of the ensemble grooving that really makes the album swing, a lot more than Cleveland's solos on his own. Titles include "Vixen", "Hear Ye Hear Ye", "See Minor", "Bone Brother", "Count 'Em", and "Little Beaver".  © 1996-2022, Dusty Groove, Inc.
(Blue label drummer logo pressing with deep groove. NOTE – Vinyl has a small edge warp that causes the first track on each side to skip. Rest plays VG. Cover has yellowing from age, small seam splits, gloss peel at the sides, and pencil in back.)

Kirk's Works (Emarcy)
EmArcy, Early 60s/1977. Near Mint- 2LP Gatefold
LP...$11.99
Cool 2LP collection of some of Roland Kirk's best stuff from his Mercury years, including a motherlode of tracks that are very very hard to find on LP! Tracks include "Reed & Deeds", "Rip Rig & Panic", "Where Monk & Mingus Live", "Get Out Of Town" ... LP, Vinyl record album

Best Coast Jazz
EmArcy, 1954. Very Good+
LP...$99.99
Not west coast, but "best coast" jazz – a prime example of the way the Clifford Brown/Max Roach team helped to cook up the intensity of the LA scene of the 50s by infusing it with a bit of New York fire! The album takes off in the extended mode of Clifford's All Stars album – ... LP, Vinyl record album

Mainstream Of Jazz
EmArcy, 1956. Very Good+
LP...$19.99
Gerry Mulligan's still far from the mainstream of jazz on this sweet little set – a great date that expands nicely from the mellower styles of the Pacific Jazz years – expanding the group a bit, with some really great results! In addition to Mulligan's usual baritone sax, Gerry also ... LP, Vinyl record album

At Basin Street
EmArcy, Mid 50s. Near Mint-
LP...$29.99 (CD...$3.99)
About as classic as you can get for the Brown/Roach group – recorded at Basin Street with a group that includes Richie Powell on piano, Sonny Rollins on tenor, and George Morrow on bass. Tracks are tight and in that firey hardbop mode the pair pioneered – and titles include "Gertru ... LP, Vinyl record album