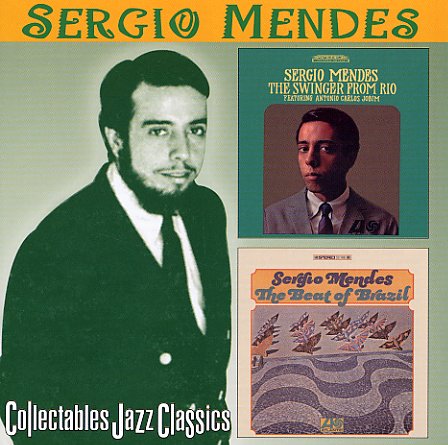 Swinger From Rio/Beat Of Brazil

Here's a reissue we never thought we'd see in the US! The folks at Collectables have put together 2 of Sergio Mendes' rarest, and earliest, albums – both of which were released by Atlantic in the mid 60's, but recorded earlier. Swinger From Rio was a jazz-oriented session, recorded in New York with a crack band of American players, like Art Farmer, Hubert Laws, and Phil Woods – plus guest appearances by Antonio Carlos Jobim and Chico De Souza. The groove here is mostly bossa instrumental, and titles include "Maria Moita", "Primavera", "Pau Brazil", "Batida Diferente", "Sambinha Bossa Nova", and "The Dreamer". Beat Of Brazil continues the same sort of bossa jazz groove, but the session was recorded in Brazil, and was originally issued by Philips under the name of Sergio Mendes & Bossa Rio (his early sextet group). Titles on that one include "Nana", "Noa Noa", "Neurotico", "Primitivo", and "Coisa No 2". The whole CD's a double-length bossa jazz groove party, and it's done up in a nicer format than the usual Collectables release. What a deal!  © 1996-2021, Dusty Groove, Inc.
(Out of print.)

Herbie Mann & Joao Gilberto With Antonio Carlos Jobim
Atlantic, 1966. Used
CD...$12.99
Although Herbie and Joao are listed together in the artist credits together for the record, they don't really play together on the record – as did Joao and Stan Getz on their album together. Instead, they trade off tracks of bossa nova material, recorded with Jobim in Rio – Joao's by ... CD

Herbie Mann & Joao Gilberto With Antonio Carlos Jobim
Atlantic (UK), 1966. Used
CD...$9.99
A great little record, and one that might be thought of best as a "Herbie Mann Plus" record – rather than a duet between the artists on the cover! Half the set features the American release of some great Joao Gilberto material from the early years in Brazil, with arrangements from ... CD

Legendary Joao Gilberto – The Original Bossa Nova Recordings 1958 to 1961
Blue Note, Late 50s/Early 60s. Used
CD...$7.99
A treasure – some of the first and best bossa nova work ever recorded! This completely essential 2 volume set compiles most of Joao Gilberto's early recordings for the EMI/Odeon label in Brazil – remarkably influential tracks recorded from the years 1958 to 1961, featuring a young Joao ... CD