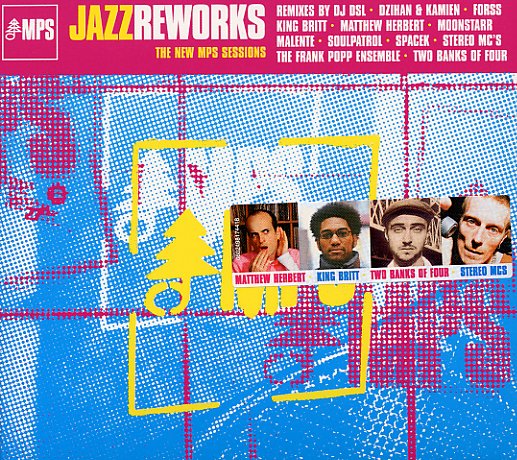 The genius of MPS Records – remixed! During the 60s and 70s, Germany's MPS label was one of the coolest things going in jazz – a groundbreaking outfit that recorded some of the most wonderful music of the time. The label had a keen ear for new sounds – and often recorded in funky modes and cross-cultural styles that were years ahead of their time. In fact, the label's music has really had a huge influence in recent years – inspiring hundreds of global DJs and producers in the creation of their own fresh work, and finding a whole new range of listeners in younger jazz fans inspired by this new generation. As tribute to the rebirth of MPS, the label's put together this wonderful set – one that takes older tunes from the classic years, and features them remixed and remade by a host of current cutting edge talents. Artists involved include King Britt, Two Banks Of Four, Matthew Herbert, Frank Popp, Moonstarr, and Spacek – on new versions of tunes that include "Color" by Erwin Lehn, "Terra Samba" by Fritz Pauer, "Feel" by George Duke, "Speech Craft" by Horst Jankowski, "Morning Sun" by Don Menza, "Um Grao De Areia" by Clarke Boland Big Band, "Anima Christi" by Mary Lou Williams, "Music For Pablo" by Hans Koller, and "Zoom" by Volker Kriegel. Think of this as MPS' version of the Verve Remixed project – with the infinitely hipper sound you'd expect!  © 1996-2021, Dusty Groove, Inc.
(Out of print.)

Disco 2 – A Further Fine Selection Of Independent Disco, Modern Soul, & Boogie 1976 to 1980
Soul Jazz (UK), Late 70s. Used 2CD
CD...$18.99
Not disco hits or the overplayed classics you may know from too many weddings – but a wonderfully deep selection of underground cuts that shows that there's still plenty of rare gems to discover from the 70s club scene! The set's put together by the man who wrote the book on rare disco mixes ... CD

Turkish Freakout Vol 2 – Psych Folk 1970 to 1978
Bouzouki Joe, Late 60s/1970s. Used
CD...$24.99
A second set of Turkish psychedelia from the 70s in the Turkish Freakout series – great stuff that really covers a lot of terrain stylistically – with a few names that'll be recognizable to lovers of the panoramic Middle Eastern grooves of the era, and a bunch more that we're being ... CD

Sensacional Soul – 37 Groovy Spanish Soul & Funk Stompers 1966 to 1976
Vampi Soul (Spain), Late 60s/Early 70s. Used 2CD
CD...$22.99
A mindblowing little set – and a massive overview of soul music in Spain during the late 60s and early 70s, filled with incredible tunes we've never heard before, all supported by great notes in both English and Spanish! The Spanish soul groove is a bit rougher than that of the US – ... CD