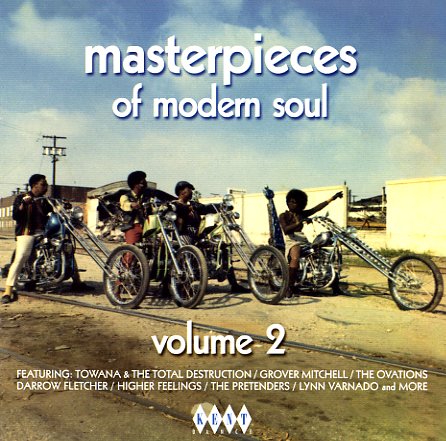 The title totally gets it right – because these are some wonderfully put-together soul tunes – mini-masterpieces of the modern variety, and the kind of cuts that are ripe for rediscovery today! Hardly any of these cuts got their due back in the 70s, but they've all got a completely sublime sound – that groove that first started as Northern Soul turned into modern – when the rhythms laid back a bit more and the lyrics hipped up a bit – moving past simple soul themes into even deeper, more mature modes. Production is great, but never commercial at all – and most of the singers still have a really great edge – raspy enough to really bring enough feeling to the tunes, but poised with the right maturity to fit the music. Completely wonderful throughout, and even better than the first volume – with 24 tracks that include some great harmonies on many numbers. Titles include "Double Love" by The California Playboys, "A Broken Heart Cries" by The Pretenders, "It's Better To Cry" by Johnny Watson, "What Hurts" by Grover Mitchell, "Still A Part Of Me" by The Minits, "Lovin" by The Pacesetters, "Always" by Garland Green, "You Gotta Be A Lady" by The Chargers, "That's The Way Our Love Is" by The Radiations, "You're Gonna Lose Me" by Freddie Hubbard & Jeanie Tracy, "Hope For Love" by Darrow Fletcher", "I Can See Him Loving You" by The Mayberry Movement, "More Than Just Somebody I Know" by Brenda Wayne, "The Fool Who Used To Live Here" by Betty Fikes, "I'm A Dreamer" by Bobby Burn, and "Wear Your Natural Baby" by Towana & The Total Destruction.  © 1996-2022, Dusty Groove, Inc.