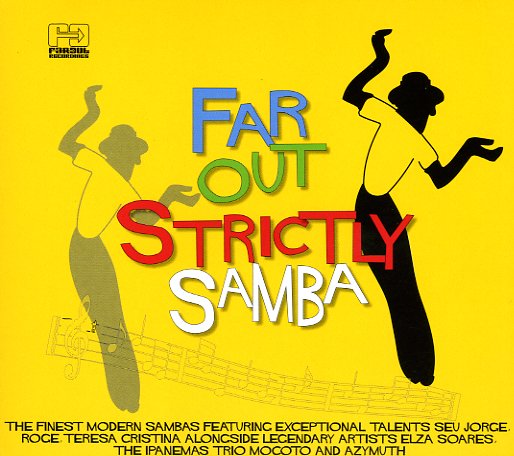 Strictly Samba, and strictly great stuff – a mix of contemporary work from the Far Out label and a host of other artists too – almost all of whom work here in a relatively classic mode! Although most of the tunes are recent, they'd fit right next to some of your classic samba sides from years past – thanks to an adherence to rootsy percussion, acoustic instrumentation, and recording techniques that really let the vocals come through strongly – adding a bold sense of soul to the music that really makes it groove. The package is really well done – and the non Far Out tracks make it way more than a straight label sampler – with work that includes "Beleza Beleza Beleza" by Trio Mocoto, "Era Bom" by The Ipanemas, "Maria Jose" by Nereu Mocoto & Swing, "Swingue Do Samba" by Roge, "Foi Um Rio Que Passou Em Minha Vida" by Tereza Cristina E Grupo Semente, "Sorri Pra Nos" by Armando Marcal, "Na Cadencia Do Samba" by Grupo Batuque, "Tudo De Bom" by Arthur Verocai, "Jongo Jade" by Aparecindinha, "Casamento Na Favela" by Zaira, and "Samba De Silvia" by Joyce.  © 1996-2021, Dusty Groove, Inc.

Far Out Presents Brazilian Bass – Inner City Tropical Soundblast
Far Out (UK), 2014. New Copy
CD...$7.99 16.99
A very hip set that goes way beyond the stock bass-heavy grooves that have been showing up on other Brazilian compilations in recent years – and a package that really does a great job of reintroducing roots to contemporary urban music in Brazil! The album offers up a Brazilian take on the ... CD

Far Out 100
Far Out (UK), 2005. New Copy
CD...$4.99 14.99
A joyous celebration of the mighty Far Out label – now over a decade old, and still one of the most freshly creative companies around! Far Out is the brainchild of London DJ Joe Davis, who has a great way of bringing together older bossa-styled grooves with a fresher take on the genre. Joe's ... CD