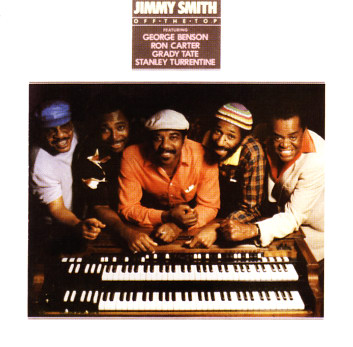 A lean little set from Jimmy Smith's back to basics years of the early 80s – an album that's recorded in a relatively old school soul jazz mode! Jimmy's mostly playing Hammond here – but also uses a bit of Arp strings at times – and the rest of the group members include George Benson on guitar, Ron Carter on bass, Grady Tate on drums, and Stanley Turrentine on tenor sax – all playing in modes that are nicely laidback and open. There's a bit of 70s warmth to the production of the record, but little other in the way of modern touches – and in a way, the record almost takes us back to the sound of Jimmy during his very last years at Verve, when he'd mostly returned to small combo work. Titles include "MASH", "I'll Drink To That", "Off The Top", "Endless Love", "Mimosa Love", and "Ain't Misbehavin" – plus a few words spoken by Jimmy at the end!  © 1996-2021, Dusty Groove, Inc.
(Cover has light wear and a name in marker on front.)