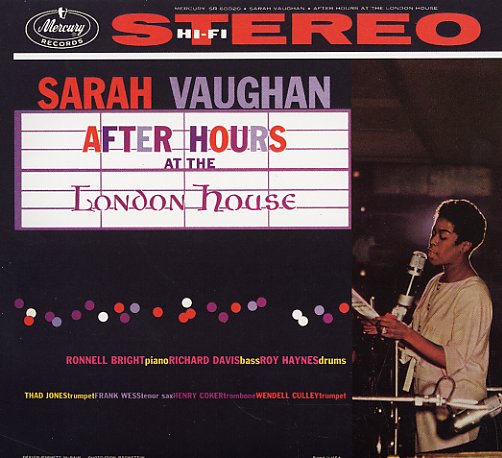 One of our favorite albums ever by Sarah Vaughan – and a really jazz-based session that's totally hip! Sarah's working here live at the legendary London House nightclub in Chicago – singing with a small combo that includes Ronnell Bright on piano, Richard Davis on bass, and Roy Haynes on drums – augmented by some great horn work from Thad Jones on trumpet and Frank Wess on tenor. The set's got a relaxed jazzy feel that's really a welcome departure from some of Sarah's more over-arranged albums from the time – and the interplay between the vocals and the horns is easy, relaxed, and very well placed throughout – a perfect summation of the subtle Vaughan genius, but one that's rarely ever captured this well on record! Titles include "You'd Be So Nice To Come Home To", "Detour Ahead", "I'll String Along With You", "Three Little Words", "Speak Low", and "All Of You".  © 1996-2021, Dusty Groove, Inc.
(Mono black label pressing with deep groove. Cover is in great shape!)

Johnny Mathis Sings
Mercury, 1967. Very Good
LP...$1.99
The final Johnny Mathis album for Mercury Records – and one of our favorites from the time! There's a nice little bounce to some of these cuts that really opens Johnny up – a style that's never too groovy, but which brings in some slight 60s syncopation to the rhythms – albeit in ... LP, Vinyl record album