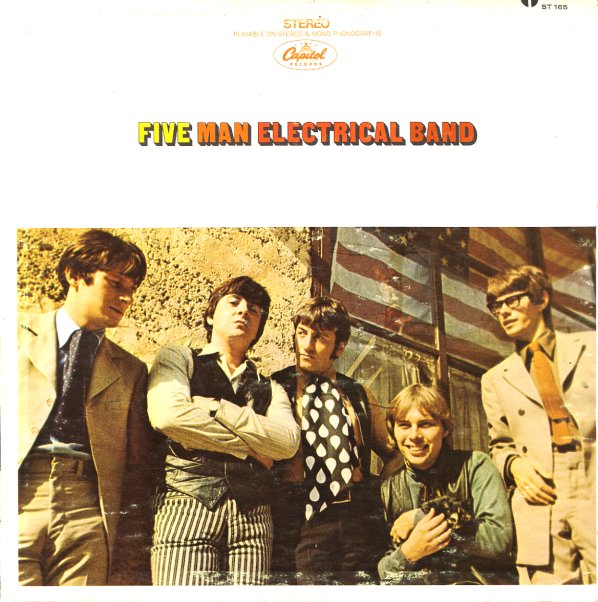 A jangle-pop spectacular from The Five Man Electrical Band – an incredibly groovy outfit from late 60s Canada! Although issued at the end of the 60s, the album's got a sweetly-crafted feel that sounds a lot like some of the best mid 60s pop – particularly that coming from overseas – almost a lost Brit Invasion sort of sound, but one that's tuned with a few odder touches that show the group's ear for some of the west coast musical changes of the time. All tunes are incredibly catchy, and recorded with great focus on the jangly lead guitar – so much so that the vocals are almost buried down a bit more in the mix, which makes for a kind of cooly tripped-out sound. Titles include "Maple Lane", "Fancy Dancin Man", "Black Sheep Of The Family", "Running Back", "Didn't Know The Time", "Five Man Electrical Band", and "Private Train". CD also features a whopping 9 tracks added to the original album – some by the group as The Staccatos – with titles that include "Half Past Midnight", "Weather Man", "Super Girl", "Let's Run Away", "Catch The Love Parade", and "Whisper Words".  © 1996-2021, Dusty Groove, Inc.
(Pickwick pressing. Cover has small upper corner ding, but is nice otherwise.)