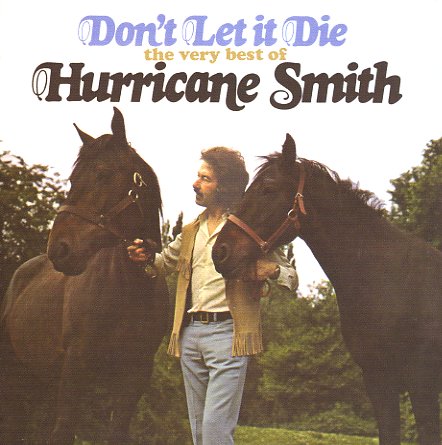 Don't Let It Die – The Very Best Of Hurricane Smith

A great collection of work by one of the most unique voices in early 70s British pop – the enigmatic Norman "Hurricane" Smith, a strange singer whose work fits into a spectrum that lies somewhere between Georgie Fame, Gilbert O'Sullivan, and Ray Davies! Like all three of those artists, Hurricane's got an ear for days gone by – a slight touch of nostalgia that comes through in the subjects of his tunes and the instrumentation that accompanies his voice. And if we were to link his style with anyone, it would probably most directly be Gilbert O'Sullivan – who shares a similarly quirky style of songwriting and arranging, and who gave Smith a hit in the tune "Who Was It?". This set features 16 tracks from Smith's early 70s years on EMI – a well-selected batch of titles that include "Aunti Vi's", "Theme From An Unmade Silent Movie", "Wonderful Lily", "Cherry", "My Mother Was Her Name", "Many Happy Returns", "Back In The Country", "Who Was It", "Take Suki Home", "The Writer Sings His Songs", and "Oh Babe What Would You Say".  © 1996-2020, Dusty Groove, Inc.