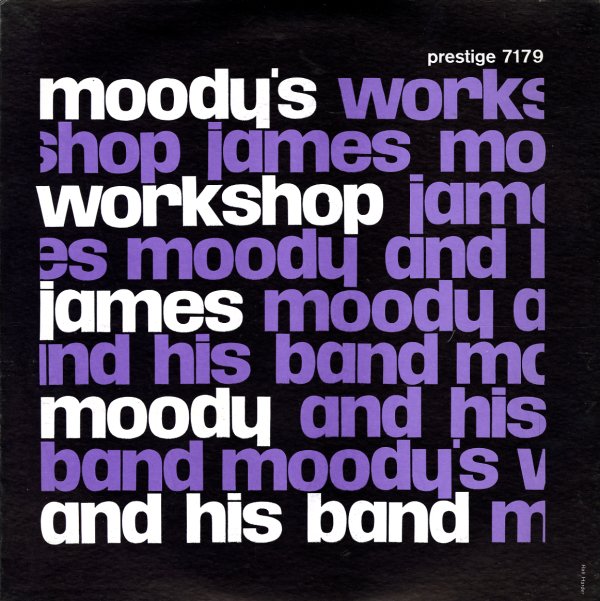 A great set from James Moody, nice and edgey, with his genius firmly in place – and done at a time when he was moving past straight bop, and into some more sophisticated modes! Quincy Jones handled the arrangements, and the group swings in a variety of modes. Moody's on alto and tenor – no flute yet at this point – and highlights include "Workshop", a great number with vocals by Eddie Jefferson, one of his best vocalese tracks from the early years, and never issued on any of his own LPs. Other tracks include "Blues In The Closet", "Keepin Up With Jonesy", "I'm Gone", "Mambo With Moody", and "Nobody Knows".  © 1996-2022, Dusty Groove, Inc.
(Yellow & black label NJ pressing with RVG/AB etch – a really nice copy! Cover has a small bit of splitting on the top seam, but is nice too.)

James Moody's Moods (black cover)
Prestige, Mid 50s. Very Good+
LP...$9.99
James Moody really blows us away with this mid 50s set – already stepping past the straighter bop of early years, and finding a way to extend his sounds and moods through some tremendous solos and mighty fresh arrangements! The album's exactly the kind that makes Moody unlike anyone else ... LP, Vinyl record album

Sax & Flute Man
Paula, 1973. Very Good
LP...$11.99
A sweet set of electric funk from James Moody – and a great little record to match the grooves he was laying down at the Perception label in the early 70s – with a very unique sound! Moody's working here alongside some sweet work on electric piano by either Jodie Christian or Tennyson ... LP, Vinyl record album

Last Train From Overbrook
Argo, 1958. Very Good+
LP...$9.99
A wonderful album from Moody – one of his "comeback" albums for Chess/Argo, recorded after his release from the Overbrook institution, hence the title. By this point, Moody was writing and playing with much more of an edge than during his bebop days – and the record certainly ... LP, Vinyl record album