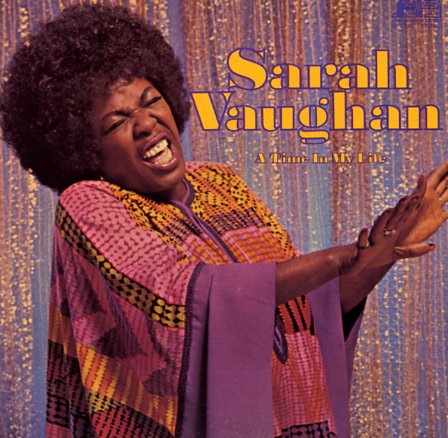 Time In My Life

Sarah Vaughn's looking pretty groovy on the cover of this album, and she's sounding pretty groovy too – thanks to some sweet 70s backings from Ernie Wilkins! The style isn't exactly funky, but it's got some fully soulful sounds, and some great electric moments too – modes that almost feel more like some of the best Kudu Records vocal sets from the time, instead of the usual Mainstream Records groove. Sarah really fits well in this sort of setting – stretching out into groovier territory than before with the same sense of change that Ella Fitzgerald or Marlena Shaw were bringing to their music at the time. Players include Jerome Richardson on saxes, Buddy Childers on trumpet, Benny Powell on trombone, Jimmy Cobb on percussion, and Earl Palmer on drums – and titles include "Inner City Blues", "Magical Connection", "Universal Prisoner", "Tomorrow City", "That's The Way I've Always Heard It", "Imagine", "On Thinking It Over", and "If Not For You".  © 1996-2022, Dusty Groove, Inc.
(Tri-color label pressing, in a unipak cover, with light wear.)

Orchestra Arranged & Conducted By Michel Legrand
Mainstream, 1972. Very Good Gatefold
LP...$2.99
A beautiful collaboration between Sarah Vaughan and Michel Legrand – and easily one of Sarah's greatest albums of the 70s! As he was doing with other singers at the time, Legrand helps Vaughan hit a new level of sophistication here – bringing in tunes that really get past simple pop ... LP, Vinyl record album

Wonderful Life
Mainstream, Mid 60s. Near Mint-
LP...$14.99
One of the more obscure 60s albums cut by jazz vocalist Irene Kral – and a great little record that shows her to be more of a singer than we expected! Some of the tunes on the set have the straight vocals with band feel of Irene's other albums, but a few more go for a groovier sort of 60s ... LP, Vinyl record album

Second To None
Mainstream, 1964. Very Good-
LP...$4.99
One of Carmen McRae's best records of the 60s – an album done with beautiful arrangements from Peter Matz, who's probably best known for his work with Barbara Streisand at the time – and who really helps McRae take her music to the next level! Carmen was already one of the most ... LP, Vinyl record album