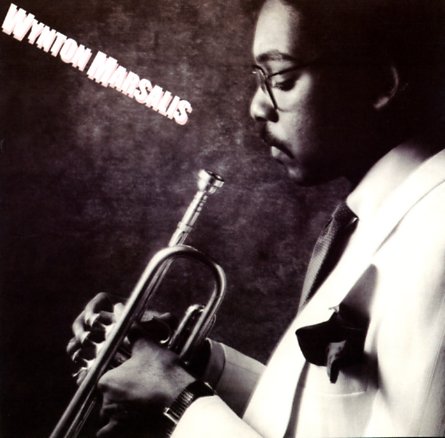 The classic debut of a young Wynton Marsalis – cut after a stretch when Wynton was working with Art Blakey, and had really sharpened his chops! The record's a wonderful return to straight jazz tradition for Columbia – but it also has some modern moments too – proof that the younger generation of 80s jazz players still had plenty of fresh sounds to bring to the table. Half of the record has Marsalis paired with the VSOP rhythm section – in a way that provides a nice link with the more modern edges of Columbia jazz a decade before. Wynton's sometimes a bit serious in his approach, but also opens up with freer Blakey-inspired moments too – and other players here include Herbie Hancock and Kenny Kirkland on piano, Jeff Watts and Tony Williams on drums, Clarence Seay and Ron Carter on bass, and Branford Marsalis on sax. Titles include "Twilight", "RJ", "Hesitation", "I'll Be There When The Time Comes", and "Father Time".  © 1996-2022, Dusty Groove, Inc.
(Original US pressing. Cover has light wear.)

Majesty Of The Blues
Columbia, 1989. Near Mint-
LP...$11.99
A bit more of a high concept album than some of Wynton Marsalis' previous efforts – a set with a few more added horns on side one, and an extended suite on side two! The work definitely shows Wynton's increasing concern with jazz history – his desire to embrace, and sometimes represent ... LP, Vinyl record album

Think Of One
Columbia, 1983. Near Mint-
LP...$3.99
Wynton Marsalis' second date for Columbia Records, and an album that already has him stretching out from the first! Unlike before, when Wynton was given a few older players to help establish his sound, the group here is all Marsalis' own – with brother Branford on tenor and soprano sax, ... LP, Vinyl record album

Straight No Chaser
Columbia, 1967. Very Good+
LP...$39.99
Classic 60s work from Thelonious Monk – featuring his incredible quartet with Charlie Rouse on tenor, certainly Monk's best-ever musical soulmate! The album features some newer versions of older tunes, and a few written just for the album – but the source of the material is not ... LP, Vinyl record album