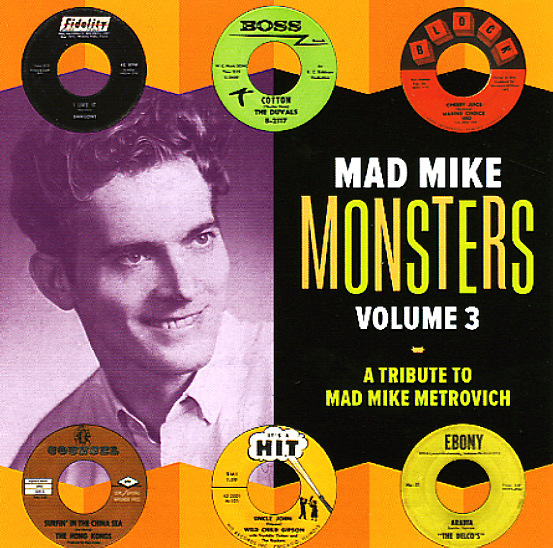 Magical music from the days when radio really mattered – an assortment of raw and raunchy singles all popularized by Pittsburgh DJ Mad Mike Metrovich in the 60s! Mad Mike had an ear that was unlike anyone else – a way of seeking out unusual tunes with a gritty edge – cuts that fell far from the charts, and included a rich array of garage, instrumental, and R&B-influenced styles! Even at the height of his popularity, Mike was dedicated to digging up little-heard singles – and would often work towards keeping them obscure by covering up the labels – a practice that was still yet to come in hip hop or Northern soul scenes. This amazing series does a great job of making Mike's music live again – combining rare singles with a few radio spots too – and packaging the whole thing will full notes on Mike, the Pittsburgh scene, and the rich array of record stores and radio stations that allowed music this great to exist! Titles on this third volume include "Firewater" by Premieres, "Strollie Bun" by Blonde Bomber, "Malanese" by Avalons, "Monkey Man" by Baby Huey & The Babysitters, "The Birds" by Motivations, "Oo Ma Liddi" by JJ Jackson & The Jackals, "Cotton" by Duvals, "Come On Back" by Big Syl Barnes, "Zebra" by Youngsters, "Done Done The Slop" by Ervin Rucker, "Cherry Juice" by Marino Choice, "The Hunch" by Mad Mike & The Maniacs, and "Uncle John" by Wild Child Gipson.  © 1996-2021, Dusty Groove, Inc.

Mello Jello Vol 1 – For Mello Muffins
Skinups, Late 50s/1960s. New Copy
LP...$13.99 (CD...$11.99)
Nothing mello about this sweet little set – because the tunes are loud, nasty, and filled with plenty of sharp edges! The collection really trawls around the bottom side of the indie rocking spectrum of the late 50s and early 60s – digging through the dirt to come up with some ... LP, Vinyl record album