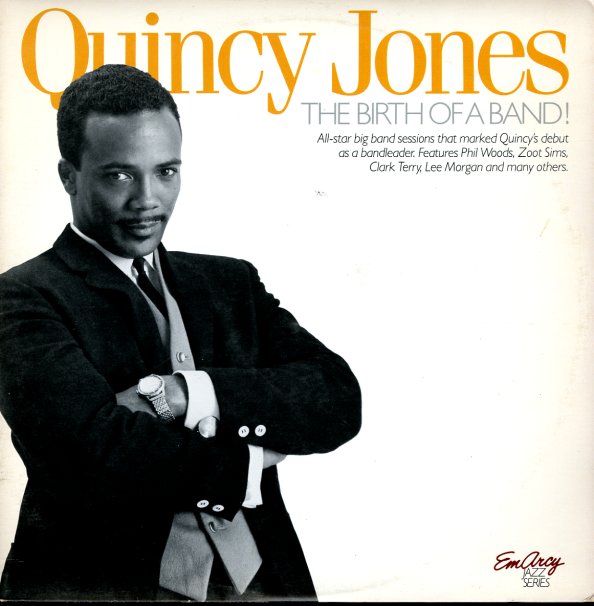 A great 80s EmArcy two-fer from Q's Mercury years! The Birth Of A Band is a very swingin', very groovy early album from Quincy – one that's clearly in the big band mode, but handled with soulful touches that really set it apart from the genre! The band is a great one all the way through – and the album features solos by Zoot Sims, Jerome Richardson, Phil Woods, Clark Terry, and Harry Edison. Tracks are very often in a soul jazz mode – arranged by Quincy and Melba Liston – and featuring versions of some of the best jazz compositions of the time. Titles include "Moanin", "I Remember Clifford", "Along Came Betty", and "Whisper Not". Quincy's world is great and wide indeed – and even at this early point in his career, he was displaying a wonderful talent for bringing in bits from all sources! The album's essentially a straight jazz set, but it's got some great exotic touches that are in keeping with the "world" theme and the globe-trotting titles on the set. The group's excellent too – with players that include Sahib Shihab, Budd Johnson, Les Spann, Lee Morgan, and Phil Woods – all working through hip arrangements by Al Cohn, Bill Potts, and Ernie Wilkins. Titles include "Ghana", "Air Mail Special", "Chant Of The Weed", "Eesom", and "I Never Has Seen Snow". Plus, this set adds "Midnight Sun Will Never Set" from the Birth Of sessions!  © 1996-2022, Dusty Groove, Inc.
(Cover has a cutout notch.)

Mainstream Of Jazz Vol 3
EmArcy (Japan), Mid 50s. Near Mint-
LP...$19.99
A rare Japanese-only part 3 to Gerry's Mainstream Of Jazz album – featuring tracks recorded in the same sessions, but unissued at the time! The group on the session is a sextet with a really wonderful approach – Bob Brookmeyer on trombone, Zoot Sims on tenor, and John Eardley on ... LP, Vinyl record album