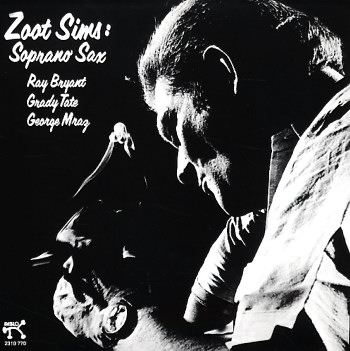 A rare treat from Zoot Sims – an album of soprano sax material, recorded in striking contrast to his more familiar tenor! The sound is oddly more traditional than usual – and unlike many other players in the 70s, Sims doesn't use the soprano in a Coltrane-inspired mode, but in a way that takes it back to its roots in jazz from earlier years. And when we say "traditional", we don't really mean trad jazz, because Zoot's phrasing and overall use of the instrument still has a relatively modern feel – augmented certainly by the excellent recording quality of the album. The rest of the group features Ray Bryant on piano, George Mraz on bass, and Grady Tate on drums – and titles include "Wrap Up", "Bloos For Louise", "Someday Sweetheart", "Baubles Bangles & Beads", and "Willow Weep For Me".  © 1996-2021, Dusty Groove, Inc.
(Cover has some edge wear and a promo stamp.)

If I'm Lucky – Zoot Sims Meets Jimmy Rowles
Pablo, 1977. Very Good+
LP...$9.99
An overlooked gem from Zoot Sims – a session that has him working in very laidback company with Jimmy Rowles on piano, who tipples the keys of the piano with a really timeless late nite kind of sound! The style here is a bit like that of the Rowles/Getz album The Peacocks – although a ... LP, Vinyl record album