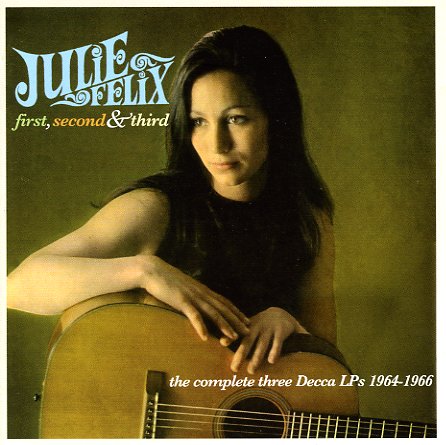 The first, second & third albums by Julie Felix – a California born folk singer who made her name in the UK – her complete mid 60s Decca oeuvre in a 2 CD set! Julie's work was the first contemporary folk releases that Decca ever issued – and a fine portrait of the voice and guitar folk pop at the time. The Julie Fenix album doesn't have a track list that's anything out of the ordinary for the time, but Julie's kind of husky, but still sweet vocals and some restrained acoustic guitars carry it over well. Tracks include "Masters Of War", "Hey Nelly Nelly", "Tarry Town", "Buttermilk Hill", "The Riddle Song" and more. The Second Album follows a similar path, but also covers some more obscure material, with "Someday Soon", "Needle Of death", "The Young Ones Move", "The Road Makers", "Judge Jeffries" and more. The Third Album is even more eclectic, covering material by Donovan, Leadbelly, Pete Seeger and more, with tracks including "To Try For The Sun", "John Reilly", "The Fox And The Goose", "The Gallows Pole", the original "I Travelled All Over This World" and more. 41 songs on 2CDs!  © 1996-2023, Dusty Groove, Inc.