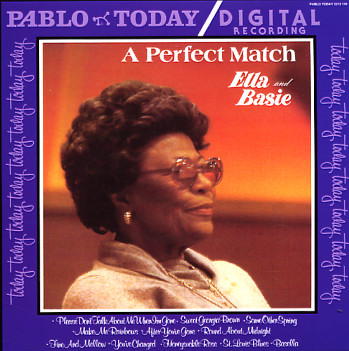 We're not sure if the match is perfect, but it's still pretty darn nice – a live performance that has Ella Fitzgerald singing in front of the Count Basie Band – all recorded before a very enthusiastic audience at the Montreux Jazz Festival in 1979! The set's a nice capper to one of Ella's biggest decades as a star – and she steps out here with a well-earned confidence that allows her to match the energy of the Basie group and take new inspiration from their fire. Titles include "Make Me Rainbows", "Round Midnight", "Basella", "You've Changed", "Fine & Mellow", "Some Other Spring", and "After You've Gone".  © 1996-2022, Dusty Groove, Inc.
(Red vinyl pressing.)

Ella Abraca Jobim – Ella Fitzgerald Sings The Antonio Carlos Jobim Songbook
Pablo, 1981. Very Good+ 2LP Gatefold
LP...$16.99
A late session from Ella – but a nice one! The setting is bossa – as you could guess by the title – and the music is handled with a smooth west coast Brazilian approach – arrangements by Erich Bulling, and players that include Oscar Castro-Neves, Paulinho Da Costa, Alex ... LP, Vinyl record album

How Long Has This Been Going On?
Pablo, 1978. Near Mint- Gatefold
LP...$9.99
A great little date – one that's presented here with a really classic sense of jazz vocal recording, but oddly the kind of record that Sarah Vaughn hardly ever got to make back in the 50s! The setting is spare and simple – backing by a quartet that includes Oscar Peterson, Joe Pass, ... LP, Vinyl record album