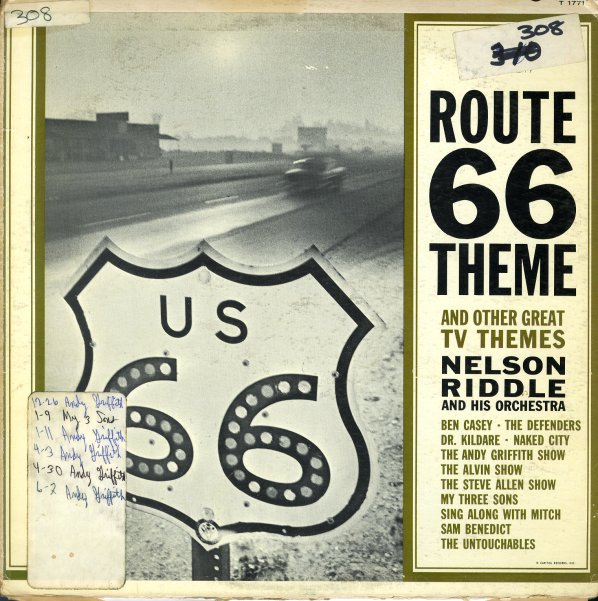 Some of the grooviest Nelson Riddle albums recorded for Capitol – both of them swinging sets based around popular TV themes of the 50s and 60s! Nelson's no stranger to that sort of work, and both albums are warm, wonderful, and filled with plenty of jazzy touches that open up the tunes tremendously. Riddle's got the set's banked in sliding strings with jazzier instrumentation over the top – in a mode that's a bit like Henry Mancini, and which makes for some wonderful contrasts. There's loads and loads of wonderful numbers on the sets, and titles include "The Untouchables", "Route 66", "Dr Kildare", "Stoney Burke", "Dick Van Dyke", "New Naked City Theme", "Lucy Theme", "McHale's Navy", and "My Three Sons".  © 1996-2021, Dusty Groove, Inc.
(Mono rainbow label pressing.)

Music from A Surplus Store
Capitol, Late 50s. Very Good
LP...$16.99
A masterpiece mixture of sound effects and loungey orchestration! Wild stuff featuring "found objects" from a surplus store – like saws, whistles, sirens, and other junk – plus the great arrangements of one of Capitol's best bandleaders. (In case you're not familiar with ... LP, Vinyl record album

Music – A Part Of Me
Capitol, 1966. Sealed
LP...$19.99
The first album that Man From UNCLE David McCallum cut for Capitol – a batch of instrumental tunes that was really masterminded by arranger HB Barnum and producer David Axelrod! The record features short groovy versions of mid 60s pop tunes, plus a few instrumentals by McCallum, Barnum, and ... LP, Vinyl record album