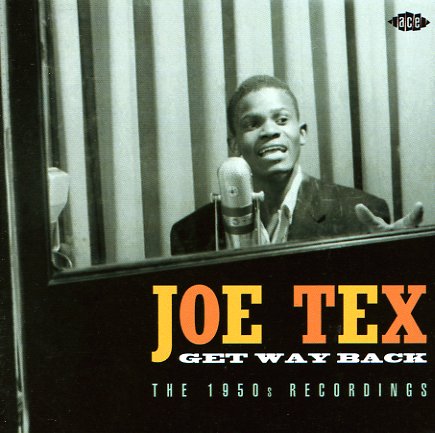 Get Way Back – The 50s Recordings

Tight early work from the great Joe Tex – whose real commercial breakthrough was to come in the southern soul scene of the mid 60s – but his early roots in jumpin' 50s cuts for the King label are pretty incredible! This set has some tight, mean little tunes that sound just as good to us as the more famous tunes by Little Richard, and other 50s firebrands – but Joe works with more of a lean, controlled burn – and he knows his way around bluesy ballads, too. Titles include "Davy, You Upset My Home", "Come In This House", "Another Man's Woman", "Right Back To My Arms", "Get Way Back", "Cut It Out", "You Little Baby Faced Thing", "Boys Will Be Boys", "Come In This Hose", "Gee, I Really Want You", "Grannie Stole The Show" and more. 27 tracks in all!  © 1996-2021, Dusty Groove, Inc.

He Who Is Without Funk Cast The First Stone
Dial/Ultra Vybe (Japan), 1978. New Copy
CD...$13.99
Joe Tex is definitely not without funk on this sweet little set – a smoking TK Records session that carries strongly from the vibe of his "I Gotcha" years! Longtime producer Buddy Killen is still on deck to keep everything tight and right – a mix of Joe's southern soul roots ... CD