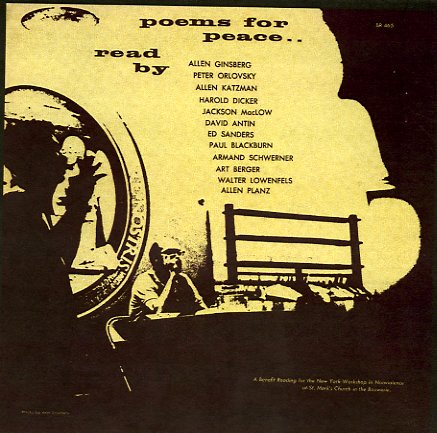 Very free-flowing poetry from a group of artists that includes older beats and younger hippies – all gathered together for the New York Workshop In Nonviolence! The album's got a bit of an ESP Records sort of feel – not in an avant jazz way, but in the manner of the freely open style that some of the label's rock and experimental groups were allowed to work – although here, the sound is relatively free of music and recorded with a sense of starkness that makes the sharper edges of the poetry come through nicely. Performances were recorded at St Mark's Church in 1967 – and titles include "Auto Poesy To Nebraska" by Allen Ginsberg, "June 20, 1961 Tangiers" by Peter Orlovsky, "From The Black Plague" by David Anton, "Speech" by Jackson McLow", "Elegy, Poems From Oklahoma" by Allen Katzman, "Peace Freak Poem" by Ed Sanders, and "Life Has No Dimension" by Art Berger.  © 1996-2021, Dusty Groove, Inc.
(Special limited CD – pressed up for us by the Smithsonian Folkways label. Comes with original cover artwork, and the CD also features a PDF file with the original liner notes and other materials from the original record release.)