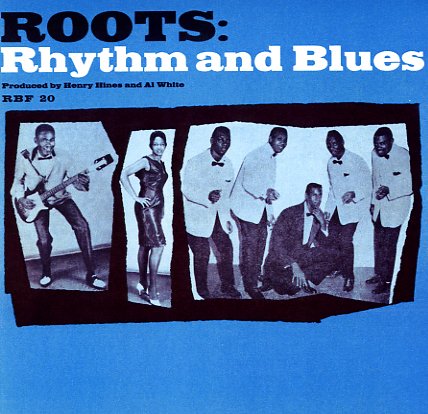 A weird little album from the Folkways label – one that features a bunch of 50s-sounding R&B tracks, but packaged almost in an ethnographic style – as if commercial American music was being examined from an outside scientific source! Given that the date of the album is 1966, and most of the work has a sound from a decade before, the approach can be somewhat excused – but honestly, much of the material here would have done great on a commercial label as well – especially some of the more soul-based material. There's a great array of stuff here – and titles include 3 tracks by The Barons – "There's A Dream For You", "Until The End", and "I Can Jerk All Night" – plus "Don't Mistreat Me" by The Queenettes, "Baby Fat" by The Dominoes, "There Is Something About My Girl That Is Mighty Sweet" by Dave Bonds, "The Eel" by Johnny Larand & The Internes, and "A Fool In Love" by Naomi Bradley.  © 1996-2021, Dusty Groove, Inc.
(Special limited CD – pressed up for us by the Smithsonian Folkways label. Comes with original cover artwork, and the CD also features a PDF file with the original liner notes and other materials from the original record release.)

I Enjoy Loving You
Dakar/Ultra Vybe (Japan), 1974. New Copy
CD...$13.99
Classic work from this massively overlooked 70s soul singer! The set's one of a rare few albums cut by Sidney Joe Qualls – a fantastic talent who's probably better known for his work behind the scenes, and as a songwriter, than he is as a voice on his own. The session is produced with a ... CD

Alice Clark
Mainstream/Ultra Vybe (Japan), 1972. New Copy
CD...$13.99 (CD...$16.99)
There weren't many vocal albums on the Mainstream label during the early 70s, and this rare soul side is a real overlooked gem! Alice Clark has a rich soulful voice, with a style that sounds a bit like Esther Marrow, mixed with some of the lead vocalists in Voices Of East Harlem – a really ... CD