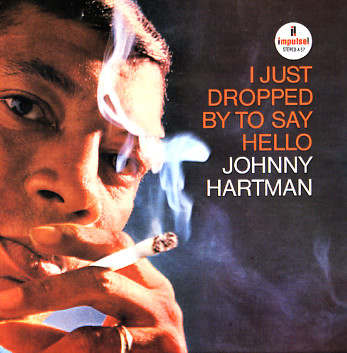 I Just Dropped By To Say Hello

A beautiful album of dark-hued vocals – sung by Johnny Hartman with a quality that's as smokey as the image of him with a cigarette on the cover! The album set a whole new standard for male vocal jazz in the 60s – and is a distillation and refinement of earlier ideas in music by Billy Eckstine, taken down to more personal and fluid levels by Hartman – and recorded here with great small group baking that includes Illinois Jacquet on tenor, Kenny Burrell on guitar, Milt Hinton on bass, and Elvin Jones on drums. The vibe is very mellow, but never sloppy or sleepy – and titles include "Charade", "In The Wee Small Hours", "Stairway To the Stars", "Kiss & Run", "Our Time", "Don't You Know I Care", "If I'm Lucky", and "Don't Call It Love".  © 1996-2020, Dusty Groove, Inc.
(80s MCA pressing in an older gatefold cover.)

First, Lasting & Always
Savoy, 1947. Near Mint-
LP...$3.99
Early recordings by Johnny Hartman – a variety of material, most originally issued as singles during the late 40s. Backing is by swinging small groups that include players like Cozy Cole, Tyree Glenn, Tony Mottola, and Sanford Gold – and the arrangements are a bit more hard-edged than ... LP, Vinyl record album

All Of Me
Bethlehem, 1956. Near Mint-
LP...$11.99
Although the world always remembers Johnny Hartman best for his Impulse recordings with Coltrane, we've always dug some of his earlier stuff – like this album – because the sound's a bit rawer, and the style's got more of a kick! The magical Hartman voice is presented in two great ... LP, Vinyl record album

Gordon Jenkins Presents My Wife The Blues Singer – Beverly Jenkins
Impulse, 1963. Near Mint- Gatefold
LP...$9.99
Well, Beverly Jenkins is hardly a "blues singer" – at least in the traditional sense of the word – but the album's a unique early Impulse session, with a relatively trad feel. Nice small group instrumentation – with Eddie Miller on tenor, Matty Matlock on clarinet, and ... LP, Vinyl record album