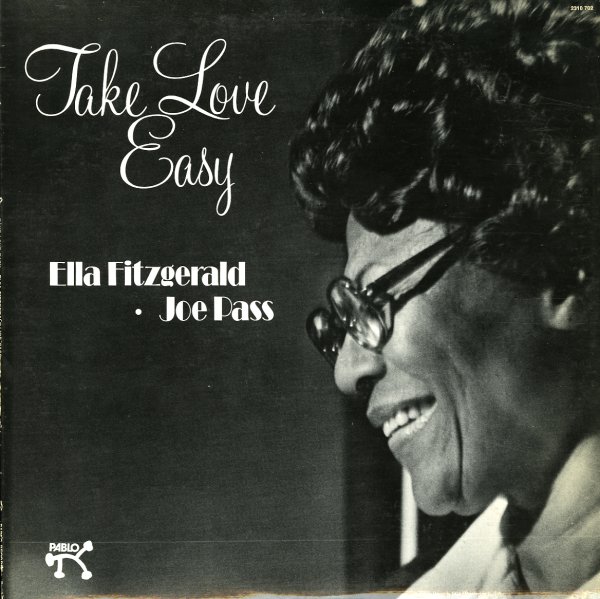 One of the great Pablo Records efforts to revisit the jazz sound of the 50s – but in fresh new ways allowed by the freer recording modes of the 70s! The album features Ella Fitgerald and Joe Pass, plus nobody else – just voice and guitar coming together in quiet, introspective ways that are completely sublime, and a very nice change from some of Ella's fuller band recordings of the few years before this album. And far from being sleepy, the intimacy of the record almost seems to set a new kind of fire – one that comes from the gentle persona of Ella, which is a far cry from the glass-breaking singer that she'd come to be known as in the mainstream! Titles include "Take Love Easy", "Once I Loved", "Lush Life", "You're Blase", "A Foggy Day", "I Want To Talk About You", and "You Go To My Head".  © 1996-2022, Dusty Groove, Inc.

Fitzgerald & Pass – Again
Pablo, 1976. Near Mint-
LP...$11.99 (CD...$6.99)
Ella Fitzgerald and Joe Pass return to the studio just a few years after their initial meeting – once again to work in a stripped-down duet format that's completely sublime! The spare setting is one that Ella never got in the older days – and there's an intimacy here that almost makes ... LP, Vinyl record album

Crazy & Mixed Up
Pablo, 1982. Very Good+
LP...$23.99
Nothing crazy and mixed up here, but a wonderful later date from Sarah Vaughan – one that's recorded with subtly sophisticated brilliance! The setting is easygoing and relaxed – far more so than most of Vaughan's records from many years past – and backing is provided by Roland ... LP, Vinyl record album

Duke Ellington Songbook Vol 1
Pablo, 1979. Sealed
LP...$11.99 (CD...$29.99)
Sarah Vaughan takes on the work of Duke Ellington – almost presented here in a style that's similar to some of the Songbook albums on Verve from the 50s! Billy Byers handles most of the arrangements here – especially on the larger group numbers – but some tracks are also in a ... LP, Vinyl record album

Montreux 77
Pablo, 1977. Near Mint-
LP...$11.99
Ella Fitzgerald swings it nicely with the Tommy Flanagan Trio – a small group on the date for backup, but one who give this Montreux performance almost as much bounce as Ella's 70s live dates with a bigger ensemble! Tommy seems to have a bit more punch in his piano than usual, and Fitzgerald ... LP, Vinyl record album