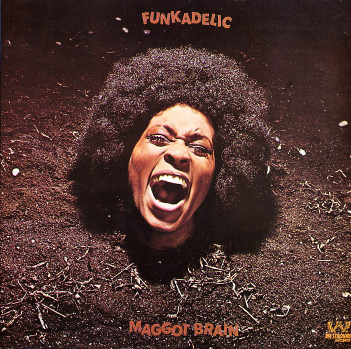 Amazing stuff – and arguably the greatest early Funkadelic album ever! The set moves past the simple fuzzy style of the group's debut, and the overly-stoned sound of Free Your Mind – and rockets into a heady funk style that's filled with sly social commentary and an incredibly dark vision of the future! The centerpiece of the album is the mindblowing "Maggot Brain" title track – a tune that begins with a chilling spoken intro, then slowly builds amidst washes and washes of post-Hendrix guitar. That cut then rolls into some shorter, funkier numbers that rank with some of the group's best ever – using the device of party-hearty energy to convey a sense of alienation and horror at the world. The whole thing's brilliant throughout – and apart from being a soul classic, the set should also rank as one of the greatest rock albums of all time! Titles include "Maggot Brain", "Super Stupid", "Back in Our Minds", "Can You Get to That", and "Wars of Armageddon".  © 1996-2021, Dusty Groove, Inc.