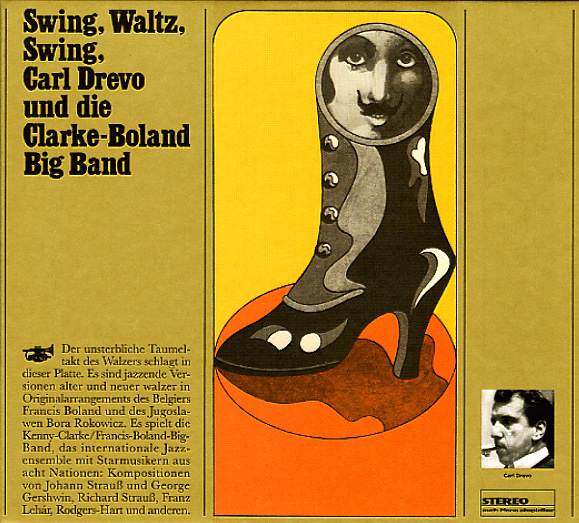 One of the coolest projects ever to come from the Clarke Boland Big Band scene of the 60s – an album done under the leadership of Austrian tenor player Carl Drewo, but one that features all of his bandmates from the better-known big band! The set's wonderfully swinging throughout – done in a jazz waltz style with plenty of modal inflections – hardly the overdone Strauss modes you might expect from Drewo's roots, and more of the groovy 60s European rhythm modes that would show up often in sessions on Saba & MPS! Most tracks dance along beautifully – using instrumentation that includes Benny Bailey and Dusko Goykovich on trumpets, Sal Nistico on tenor, Sahib Shihab on baritone and flute, and Derek Humble on alto – all supported by the CBBB rhythm team of Francy Boland on piano, Jimmy Woode on bass, and Kenny Clarke on drums – plus the amazing Fats Sadi on percussion, really grooving along nicely at the bottom. Drewo's the lead soloist in most numbers, but he allows plenty of space for his bandmates too – and the session's got a sound we'd rank right up there with some of the best Clarke Boland projects of the 60s. Titles include "Wives & Lovers", "Fruhlingsstimmen", "My Favorite Things", "Claudia", "Schon Ist Die Welt", "Just Give Me Time", and "Keep On Keeping On".  © 1996-2021, Dusty Groove, Inc.