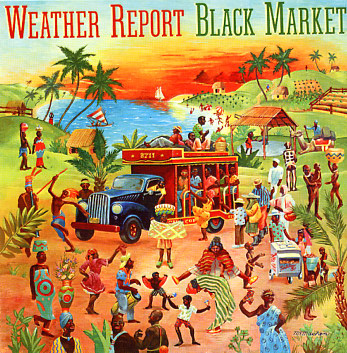 A new chapter in the sound of Weather Report – but one that's still equally classic! Founding members Wayne Shorter and Joe Zawinul are joined here by Jaco Pastorius on bass, Chester Thompson on drums, and Alejandro Acuna on percussion – and Pastorius especially helps bring a lot of new colors and energy to the group! The style is still somewhere in the space of years past – somewhat cosmic at times, but also well-suited to leaner, flowing grooves that stretch out warmly – making great use especially of Zawinul's keyboards. Added players include Alphonso Johnson on bass and Don Alias on drums – and titles include "Black Market", "Cannon Ball", "Three Clowns", "Barbary Coast", "Herandnu", "Elegant People", and "Gibraltar".  © 1996-2021, Dusty Groove, Inc.
(Includes the printed inner sleeve. Cover has light wear.)