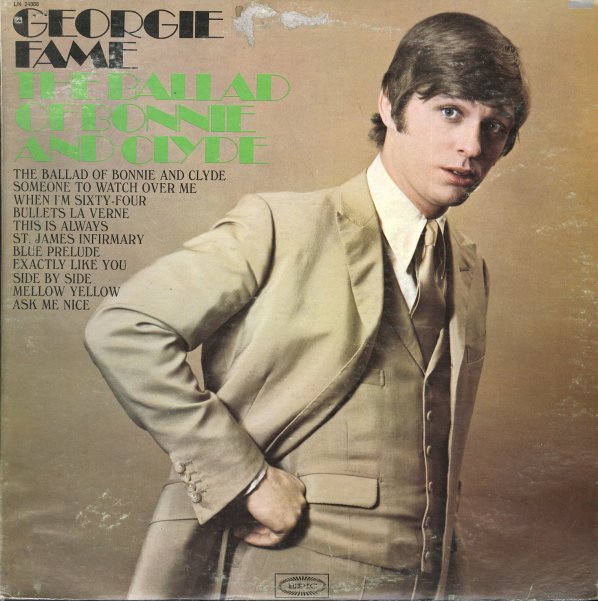 One of the few American albums ever issued by Georgie Fame – a great set of tracks from his early CBS years, put together with a package that was bound to appeal to US fans digging the Bonnie & Clyde movie! The work here is a hip mix of jazz, soul, and R&B styles – all served up with that Georgie Fame charm that made his music unlike anyone else's at the time. And although we're not sure, it appears that there's a few tracks here that might not have been issued on LP back in the UK – as the set list features 11 tracks that include "Mellow Yellow", "Bullets La Verne", "This Is Always", "Side By Side", "Blue Prelude", "Someone To Watch Over Me", "Ask Me Nice", "When I'm Sixty Four", and "The Ballad Of Bonnie & Clyde".  © 1996-2022, Dusty Groove, Inc.
(Yellow label stereo pressing. Cover has light wear.)

Georgie Does His Thing With Strings
CBS (Japan), 1969. Very Good+
LP...$28.99 38.99
A great cover, and a great little record to match – one that has Georgie Fame singing with a host of string-heavy backings from the great Keith Mansfield! Given Mansfield's roots in the sound library scene, the style here is never as sleepy or hokey as you might expect from the "strings& ... LP, Vinyl record album

November Girl (Jazzman pressing)
Jazzman, 1970. Near Mint-
LP...$6.99
A rare gem from the Clarke Boland Big Band – and one of the group's few vocal sessions ever! The album's a really unique one – recorded in the UK in 1970, and featuring singer Carmen McCrae joining the group for a fresh and unusual batch of tracks – most of them originals written ... LP, Vinyl record album

Spotlight On Jacy Parker
Verve, 1962. Near Mint-
LP...$39.99
The spotlight's on Jacy Parker, but the lady only seems to have cut this solitary album for Verve – which is a goddamn shame, because the record's so great! The album's a sweetly swinging set that features Jacy on both piano and vocals – working in a small combo with Ernie Royal on ... LP, Vinyl record album

I Want A Country Man
Groove Merchant, 1973. Very Good+
LP...$2.99
Very hip work from Dakota Staton – one of her great early 70s albums for the Groove Merchant label! Backings here are by the band of Manny Albam – in a mode that's jazzy, but inflected with plenty of soul – and which has the same sort of rhythmic pulse that you'd find in Lou ... LP, Vinyl record album