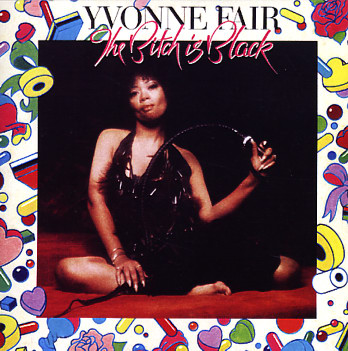 Heavy heavy funk from the mighty Yvonne Fair – a 70s bad soul sister that we'd rank right up there with Betty Davis! Yvonne got her start working with James Brown in a sweeter mode, but by the time of this mid 70s debut, she'd hit a really hard-wailing sort of style – one that had the righteous vocal lead of singers like Davis, Maxayn, or a rare few others – and which gets support here from some really full, rich production from Norman Whitfield! Whitfield brings in bits of strings alongside the heavier bass, drums, and keyboards – and makes for a unique mix that almost goes a bit southern soul, while still staying in the hipper styles of 70s Motown – letting Yvonne get a bit personal on a few tear-jerking numbers, and come wailing back with full force on the funkier ones. Titles include the classics "Funky Music Sho Nuff Turns Me On" and "It Should Have Been Me" – plus "Let Your Hair Down", "Love Ain't No Toy", "Tell Me Something Good", "It's Bad For Me To See You", "Stay A Little Longer", and "Walk Out The Door If You Wanna".  © 1996-2022, Dusty Groove, Inc.