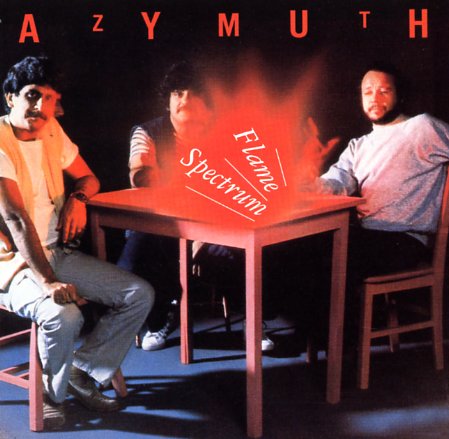 Subtle magic from Azymuth – two mid 80s albums, back to back on a single CD! First up is Flame, a set that nicely lives up to its title – and which shows the strengths the trio picked up during their years in the US! The sound here is round and soulful – a great fusion of the group's roots in the 70s Brazilian fusion scene, and some of the smoother styles of the California one – never in a way that's too soft or commercial. As usual, there's a heavy emphasis on the keyboards of Jose Roberto Bertrami – who also sings a bit in a wordless, scatting sort of way. Flora Purim joins in on vocals on the cut "The Textile Factory" – and other titles include "Tamal Vista Boulevard", "Rapa Poeira", and "Flame (O Amor E Chama)". Spectrum is proof that Azymuth were one of the few groups who could keep things real at a time when most of their fusion contemporaries were sounding cloying and commercial! The album's got a well-rounded sound that really shows the group's roots in the 70s, and their wonderful evolution over the years – that keyboard-heavy sound that's always warm and soulful, and never too tinny or beat-heavy. Jose Roberto Bertrami's keys come across with a 70s warmth that most groups were lacking by this time – and the backing from Alex Maheiros on bass and Ivan Conti is always very subtle, and simple too – swirled up alongside the keyboards, and mixed in with a few occasional bits of guest instrumentation – including trumpet from Marcio Montarroyos on one track, and flugelhorn from Paulinho Olivera on a few more. Titles include versions of Marvin Gaye's "What's Going On", Jobim's "Song Of The Jet", and Ivan Lins' "The Island", plus the cuts "Universal Prisoner", "Candomble", and "Areis".  © 1996-2021, Dusty Groove, Inc.