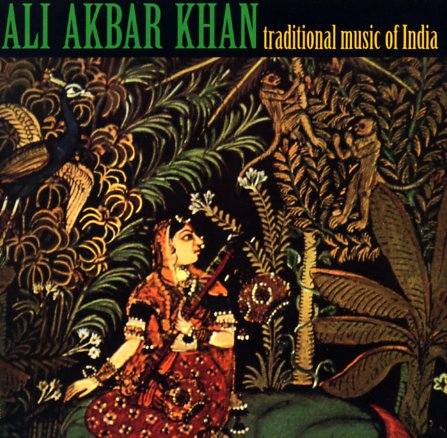 Traditional Music Of India (plus The Soul Of Indian Music)

2 albums' of music from the short-lived world music side of Prestige Records – both of them featuring the sarod of Ali Akbar Khan! Traditional Music Of India features two side-long tracks – both ragas that center around Khan's tremendous work on sarod – very inventive and improvisatory – almost jazz-based at times in the way he riffs on certain combinations of notes. The only other instrumentation is tambura and tabla – both of which are used sparely, so that the record retains a very airy sound. Titles include "Raga Chandranandan" and "Raga Bhairavi". The second album on the set is The Soul Of Indian Music – issued around the same time, and with a relatively similar approach – two tracks that each take up a side apiece of the record, and which feature slow-building sarod from Ali Akbar Khan. Khan's playing is sometimes mellow, sometimes quite intense – and the backing from tabla and tambura often moves into pace to match. Titles include "Raga Ramdasi Malhar" and "Raga Malika".  © 1996-2021, Dusty Groove, Inc.