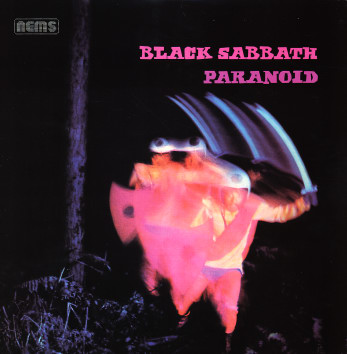 Also available
Black Sabbath — Paranoid ... CD 3.99
Quite possibly the greatest moment of genius ever from Black Sabbath – and a genre-changing record that influenced generations! The group are at their lean, raw best here – free from any cliches at all, and working in an incredibly heady brew of fuzzy guitar, romping bass, and dark drums – all topped by the instantly recognizable screech of the young Ozzy Osborne! Guitarist Tony Iommi virtually redefines rock use of the guitar with this record alone – and the Oz follows suit with some of the creepiest vocals set to record ever. Titles include the classics "Paranoid" and "Iron Man", plus "War Pigs", "Planet Caravan", "Electric Funeral", "Hand Of Doom", and "Rat Salad".  © 1996-2023, Dusty Groove, Inc.
(Late 70s RCA music club WB shield pressing. A nice copy.)