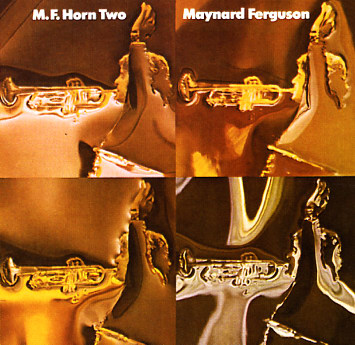 Soaring big band work from trumpeter Maynard Ferguson – one of his key albums done with help from Brit Easy genius Keith Mansfield! Mansfield really helped Ferguson reinvent the sound of his big band at the end of the 60s – taking the sometimes modern, sometimes brassy sound of his earlier work and forging it into a tighter groove that often had a nice bit of bounce at the bottom – a slightly funky sound that made Maynard sound hipper than ever, and which also brought in a nice dose of electric keyboards and guitar to groove things up. Arrangements are by Kenny Wheeler, Mansfield, and Adrian Drover – and titles include "Give It One", "Hey Jude", "The Summer Knows", "Mother", "Spinning Wheel", "Shaft", and "Free Wheeler".  © 1996-2021, Dusty Groove, Inc.
(Cover has light wear.)

Live From San Francisco
PAJ, 1984. Sealed
LP...$5.99
Maynard Ferguson live – and still holding onto all the great sort of grooves he cooked up in the studio during the 70s! The performance is from a 1984 appearance at San Francisco's Great American Music Hall – and Maynard's got the group in super-tight, super-soulful formation – ... LP, Vinyl record album

Storm
PAJ, 1982. Near Mint-
LP...$4.99
A sweet jazzy storm from Maynard Ferguson – a record from the early 80s, but one that's still got all the dynamic power and groove of Maynard's Columbia Records classics from the decade before! As with those, the approach here mixes electricity in the rhythms with sublime horn charts over ... LP, Vinyl record album

Six By Six (aka Maynard Ferguson Sextet)
Mainstream, Mid 60s. Near Mint- Gatefold
LP...$9.99
A record that will really open your ears to the talents of Maynard Ferguson – especially if you only think of the trumpeter in terms of a big band setting! Here, Maynard's trumpet is super-sharp – working in a killer group that manages to swing, while also opening to lots of modern ... LP, Vinyl record album

Boy With Lots Of Brass
Mercury, 1957. Very Good+
LP...$9.99
There's definitely lots of brass here – as you might guess from the title – but never so much so that it gets in the way of individual soloing by Maynard Ferguson! The date features Maynard working with arrangements by Willie Maiden, Al Cohn, Ernie Wilkins, and Bill Holman – all ... LP, Vinyl record album

MF Horn 4 & 5 – Live At Jimmys
Columbia, 1974. Near Mint- 2LP Gatefold
LP...$3.99
A sweet double-length set from Maynard – one that's live and totally cooking, and proof that Ferguson's funky big band style could work equally well in a concert setting! As on other Ferguson classics from the time, the instrumentation includes a good deal of Fender bass and electric piano ... LP, Vinyl record album

Primal Scream
Columbia, 1976. Sealed
LP...$11.99
One of the funkiest records ever from Maynard Ferguson – the climax of a great run of bigger group grooves in the 70s! The record's a tight batch of groovers, with production and keyboards by Bob James – and the whole thing's a mixture of big band funk and electronics that's simply out ... LP, Vinyl record album

It's My Time
Columbia, 1980. Very Good+
LP...$5.99
Maynard kicks off the 80s with another in his run of successful albums for Columbia – blending together funky fusion and disco in a very sweet groove! He's actually got some soulful help on the session – working with Tom Tom 84 on some of the record's best tracks, which come across ... LP, Vinyl record album

Maynard Ferguson (1971)
Columbia, 1971. Near Mint-
LP...$1.99
Maynard Ferguson's looking a bit shaggy on the cover of this one, but his grooves are as tight as ever – and packed with a good degree of funk in the arrangements too! Maynard's returning here to the great territory of the MF Horn album – and using help from British arrangers that ... LP, Vinyl record album