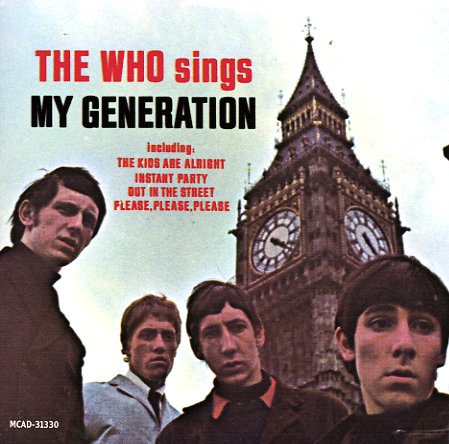 Who Sings My Generation

The first full-length set from The Who – a blistering batch of rough-edged tunes that run the gamut from bluesy soul to sweeter pop to guitar-driven grinders that show an incredible amount of power – even at this early point! The album's somewhat all over the map, but in a good way – in that it already displays the rich talent the group had for many styles of music – that hard-to-peg quality that made The Who so undeniably Who-like over the years. Titles include the classics "The Kids Are Alright" and "My Generation" – plus "Instant Party", "A Legal Matter", "Out In The Street", "The Good's Gone", "La La La Lies", and "It's Not True".  © 1996-2022, Dusty Groove, Inc.
(Black label stereophonic pressing. "Division Of MCA" printed on back cover. Cover has some ring and edge wear, discoloration from age, a small sticker at the bottom right corner, and a name in marker in front.)