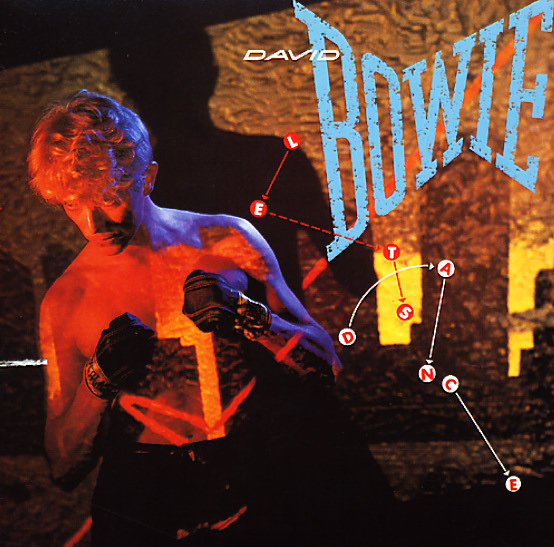 A mega-hit for David Bowie – and an album that reduced some of the complexity of previous efforts, yet still managed to hold onto all that was great! There's definitely some massive chart material here, but the tunes are still some of the best of their time, pop-wise – tracks that bring forward the best dark corners of the Bowie mythos, and refine them slightly for a new generation – always in tunefully compelling ways. And despite the crossover fame of the set, it holds up surprisingly well over the years – possibly because of that status. Titles include "Modern Love", "China Girl", "Let's Dance", "Without You", "Criminal World", and "Cat People" (in a different take than the soundtrack version.)  © 1996-2021, Dusty Groove, Inc.
(Original pressing with Masterdisk stamp/RL etch. Includes the printed inner sleeve. Cover is lightly bent at the top right corner.)

Stage
RCA, 1978. Very Good 2LP Gatefold
LP...$16.99 (CD...$24.99)
A tremendous live set cut during the height of David Bowie's years in Berlin – and the kind of performance that showed that his more experimental work from this time could be every bit as appealing as the classics! The first half of the set features some amazing numbers from the Heroes and ... LP, Vinyl record album

Ziggy Stardust – The Motion Picture
RCA, 1973/1983. Near Mint- 2LP Gatefold
LP...$33.99
A great package that includes the "final" concert by David Bowie's Ziggy Stardust and the Spiders From Mars persona – recorded at London's Hammersmith Odeon in 1973, and pulled from the soundtrack to the DA Pennebaker film of the same name! The original film featured Bowie, Mick ... LP, Vinyl record album

David Live – Live At The Tower Philadelphia 1974
RCA, 1974. Very Good 2LP Gatefold
LP...$19.99 (CD...$29.99)
A classic double live set from David Bowie – recorded during his years as The Thin White Duke (as you might guess from the cover!), but featuring a fair bit of material from the Ziggy Stardust years! The music is pretty straightforward, and pretty rocking – lots of fuzzy guitar in the ... LP, Vinyl record album

Changes Two
RCA, 1981. Near Mint-
LP...$29.99
The second great entry in the Changes series from David Bowie – and, like the first, a well-chosen array of tracks that really get at his creative genius as a pop star – which includes a few great titles from his post-Berlin years! The set does a great job of spanning the 70s – ... LP, Vinyl record album