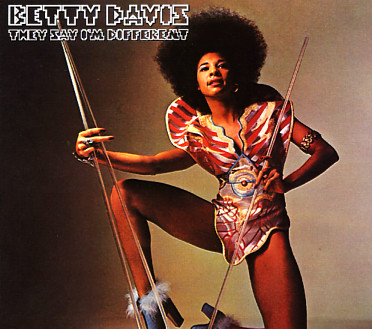 Killer work from Betty Davis – one of the most impressive female funk talents ever! If you ever needed a definition of funk, this record may well be it – snapping drums, sharp-edged guitars, and sex-filled basslines that slink and slide all over the bottom of the grooves – a perfect setting for Betty's incredible vocals – which themselves have a smokey, raspy quality that's completely unique! At times, Davis is almost speaking, but at others she's practically screaming – belting out the lyrics in a way that makes you feel like you're sharing some space with her at the end of the bar as she gets more and more wound up about issues and people who are on her mind. And as if the vocals weren't enough, the backings are incredible too – filled with drum breaks and basslines that few other albums can match – all wrapped around badass tunes that include "Shoo-B-Doop & Cop Him", "He Was A Big Freak", "70's Blues", "Git In There", "Special People", "Don't Call Her No Tramp", and "Your Mama Wants Ya Back".  © 1996-2021, Dusty Groove, Inc.
(Limited edition repress of 1000 copies – remastered from the original tapes, and pressed at RTI!)