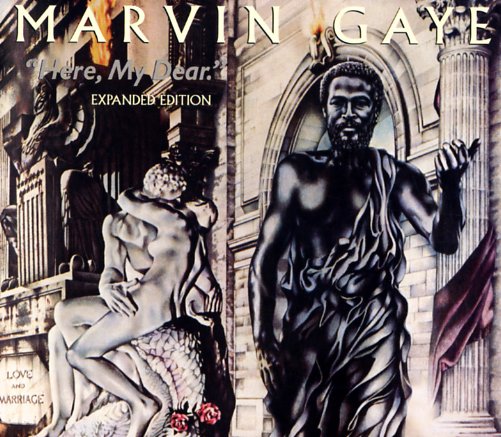 Wonderful stuff – and one of our favorite-ever Marvin Gaye albums! This is the legendary two-record set that Marvin wrote and recorded as an alimony payment to his ex-wife Anna Gordy (the story's pretty long, and we won't get into it here – suffice it to say that when stars get a divorce, watch out!) Although the album was thought of as a no-brainer quickie at the time – and predicted to fail so that Anna wouldn't get any cash from it – the record is an extremely well-crafted one, filled with extremely personal songs that also have a warm soulful finish, in the style of Marvin's work on the LP I Want You (which is kind of a nice bookend to this one – as it was an extended love poem to the young girlfriend that caused him to split up with Anna!) Hard and soulful, the record's a searing testimony to the relationship between Marvin and Anna, and a painful document of the troubles between them – set to some mellow grooves that are easily some of Marvin's greatest of the 70s! The set's filled with great "lost" Marvin Gay songs, too – like "Sparrow", "When Did You Stop Loving Me", "Anger", "You Can Leave, But It's Going To Cost You", and "Time to Get it Together". Expanded CD features the famous 12" instrumental version of "A Funky Space Reincarnation" – plus a full set of 12 bonus alternate mixes produced by the likes of Mocean Worker, Easy Mo Bee, Leon Ware, Marcus Miller, Prince Paul, Bootsy Collins, Slaam Remi, and The Randy Watson Experience – including "Anger (alt extended)", "Here My Dear (alt mix)", "Time To Get It Together (alt extended mix)", "Falling In Love Again (alt version)", "I Met A Little Girl (alt version)", "Sparrow (alt version)", and "Anna's Song (inst – alt version)".  © 1996-2022, Dusty Groove, Inc.

Share My Love (with bonus track)
Motown/Reel Music, 1973. New Copy
CD...$8.99 16.99
A heavy heavy set from Gloria Jones – a record that features some killer Paul Riser arrangements that are right up there with the deepest Motown work of the early 70s! Jones' groove is always a bit different than most of her contemporaries – not the usual Motown bag, and really far-reac ... CD