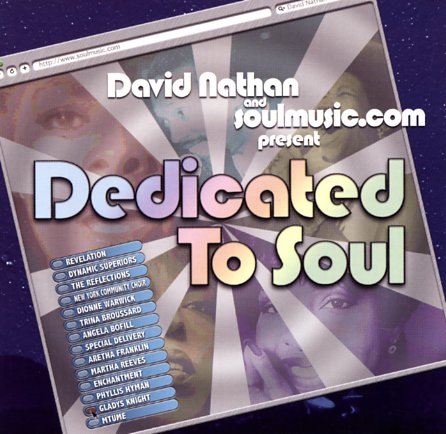 The great David Nathan is definitely dedicated to soul – a longtime soul fan, soul supporter, and soul record label head – thanks to all the work he's done at Soulmusic.com! This set really shows David's special ear for a great tune – the kind of classic soul cuts that always get us moving, with an especially strong batch from the 70s – and a few contemporary cuts that fit in nicely with the nix. The vibe is more in a modern soul mode, with a nice mix of uptempo and soaring styles – and the set even includes some unreleased material – with titles that titles include "Get Ready For This" by Revelation, "Face The Music" by Dynamic Superiors, "Three Steps From True Love" by Reflections, "Make Every Day Count" by New York Community Choir, "All The Reasons Why" by Angela Bofill, "Love Strong Enough To Move Mountains" by Martha Reeves, "Sailing" and "Why Do I Feel So Sad" by Trina Broussard, "It's You That I Need" by Enchantment, "Closer The The End" by Mtume, "Hold On" by Gladys Knight & The Pips, "Only Heaven Can Wait" by Dionne Warwick, and "I Destroyed Your Love" by Special Delivery.  © 1996-2022, Dusty Groove, Inc.