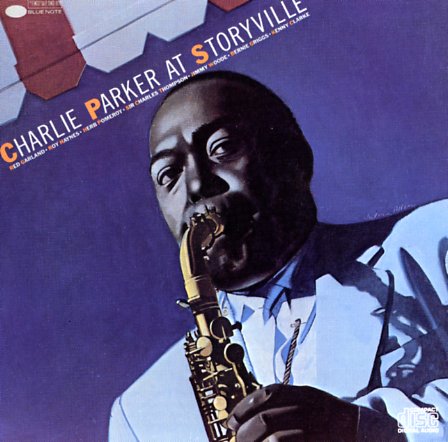 Rare work by Charlie Parker, recorded at Storyville Nightclub in Boston in 1953 – originally broadcast on radio station WHDH, and featuring Bird in a more open, relaxed style than his studio sessions. The recording quality is a bit dated, but the quality of the playing isn't – with extremely fresh solo work by Parker, and great supporting work by players that include Herb Pomeroy, Red Garland, Roy Haynes, Kenny Clarke, and Sir Charles Thompson. Titles include "Cool Blues", "Dancing On The Ceiling", "Groovin High", "Out Of Nowhere", "Moose The Mooche", and "I'll Walk Alone".  © 1996-2022, Dusty Groove, Inc.
(Original 80s pressing. Includes the Blue Note inner sleeve.)