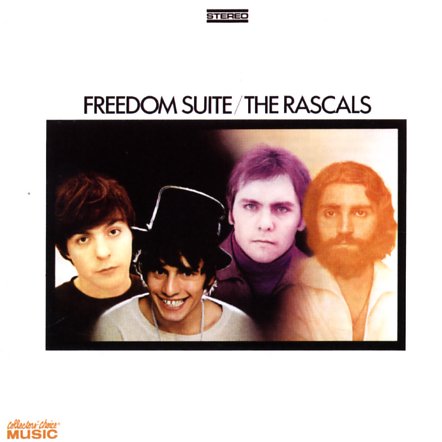 A double-length set from The Rascals – possibly their most stretched-out exploration of ideas, at least during their initial run for Atlantic Records! The 2LP set features a fair bit of shorter, catchier tunes on the first record – many with some righteous soul overtones – but on the second record, the group really open up – hitting some longer jamming tunes on side three, and moving into a 15 minute instrumental on side four! Vocals are great from all three singers – Gene Cornish, Eddie Brigati, and Felix Cavaliere – and the rhythms are rock-solid too, often augmented with a bit of Atlantic-styled backings by Arif Mardin, to further enforce the soulfulness of the set. Titles include the hit "People Got To Be Free", plus "American The Beautiful", "Any Dance'll Do", "A Ray Of Hope", "Look Around", "Boom", "Heaven", "Cute", "Baby I'm Blue", and "Adrian's Birthday".  © 1996-2022, Dusty Groove, Inc.
(In the silver foil cover, including the printed inner sleeves. Cover has a cut notch and light surface wear.)

See
Atlantic, 1969. Very Good+
LP...$2.99
Harder rocking and almost deeper soul than before – and a tremendous evolution in the music of The Rascals – light years past the pop hits of a few years before! The group co-produced the album with Arif Mardin, and the sounds here are even more sophisticated than their Once Upon A ... LP, Vinyl record album