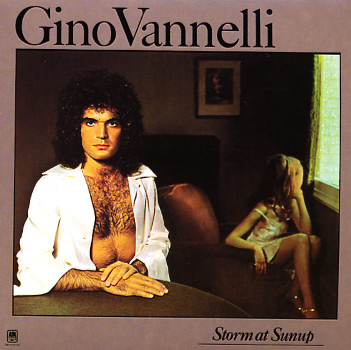 Massive 70s magic from Gino Vannelli – a record that's far better than you'd think from Gino's cheesy look on the cover! During this stretch, Gino and brother Joe Vannelli found a wonderful place for themselves amidst a variety of contemporary modes – certainly pop, but also touched with some soulful overtones too – and usually done with some surprisingly clever touches on instrumentation and production that often gave their tunes a bit more electricity and flanged-out warmth than most of their contemporaries. We're not saying that Gino's as timeless as Steely Dan, but there's honestly a real appeal from that camp going on here – one that sounds better and better as time goes by! Titles include "Father & Son", "Where Am I Going", "Mama Coco", "Keep On Walking", "Storm At Sunup", and "Love Is A Night".  © 1996-2023, Dusty Groove, Inc.
(Includes the printed inner sleeve. Cover has light wear.)

Brother To Brother
A&M, 1978. Very Good+ Gatefold
LP...$5.99
A really standout bit of blue-eyed soul from Gino Vannelli – the kind of record that shouldn't be so great, but really holds up well over the years! The style is tight and studio-oriented – somewhere in the mode of Bobby Caldwell and some of Gino's other cross-over contemporaries ... LP, Vinyl record album

Brilliance
A&M, 1982. Near Mint-
LP...$8.99
The title's certainly right on this one – because Atlantic Starr serve up a really brilliant blend of electro funk and mainstream soul – balanced with that near-perfect sound that made them one of the best groups of their generation! Despite the size of the combo, the sound is ... LP, Vinyl record album

Straight To The Point
A&M, 1980. Very Good
LP...$6.99
Atlantic Starr definitely get straight to the point on this set – bursting out strongly with an upbeat groove from the very first note – all produced to perfection by maestro Bobby Eli, in the same manner as some of his other great late 70s work for other artists! The group's a big one ... LP, Vinyl record album

Shine On
A&M, 1980. Very Good+
LP...$4.99
Massively solid boogie work from Jeffrey Osborne and LTD – still grooving beautifully at the end of the 70s, and working here with top-shelf production from Bobby Martin! The set's got that buoyant LTD groove that was a perfect foil for Osborne's soaring vocals – a sound that never ... LP, Vinyl record album

Togetherness
A&M, 1978. Very Good+
LP...$9.99
Jeffrey Osborne's really emerging strongly here in the mellow soul mode – especially on the album's two great ballad cuts, "Concentrate On You" and "We Both Deserve Each Other", both of which are smooth mellow steppers with a modern soul approach that's slightly less ... LP, Vinyl record album

Dancing Up A Storm
A&M, 1979. Very Good
LP...$0.99
(Cover has light wear and a cutout notch. Vinyl has a slight warp that does not affect play.) LP, Vinyl record album

Mother, Jugs, & Speed
A&M, 1976. Near Mint-
LP...$7.99
An all-star soundtrack to this comedy film from the 70s – starring Raquel Welch, Bill Cosby, and a very young Harvey Keitel! Most of the tracks on the set are from other A&M albums, but there's a few tunes that are original to the set – including the vocal track "No Love ... LP, Vinyl record album